Going into Tuesday’s final Battle Rounds of The Voice Season 12, Adam Levine was the only coach who still had a steal left. But on whom would he use it, especially considering that the evening consisted of a mere three sing-offs, and there was no way Alicia Keys was going to pass on Lilli Passero? (I mean, come on — she’s a goddess.) Keep reading and find out the answer (as if you don’t already know!), then we’ll play favorites in the comments.

Team Alicia: Lilli Passero defeated Lauryn Judd on “Every Little Bit Hurts” | In rehearsals, Lilli seemed to have the advantage, seeing as she’s older, has a bigger voice than her schoolgirl teammate, and could relate the Brenda Holloway song to a particularly ouchsome breakup. But damn, that Lauryn sure has a lovely voice, too. In their battle, they both sang beautifully, though Lauryn’s youthful squeakiness was no match for the power and depth of Lilli’s voice. Lilli looked — and, more importantly, sounded — so at home on that stage, so in her element, that it was a highly enjoyable sing-off, yet it wasn’t even a contest.

Team Adam: Jesse Larson defeated Taylor Alexander on “Shameless” | Even Adam admitted that the pairing of Jesse and Taylor “makes no sense at all.” But maybe that would make it brilliant? At first, Taylor’s twang on the Garth Brooks version of the Billy Joel song seemed to trip him up. Then, he had trouble hitting the uppermost reaches of his range. All of which seemed to suggest that the oomph of Jesse’s voice would do him in. On stage, Taylor acquitted himself nicely — so nicely that, frankly, I preferred his performance — but the sheer force of Jesse’s vocal wouldn’t be denied. 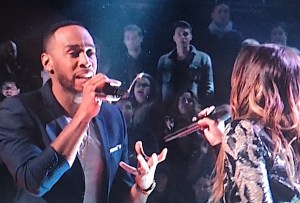 Team Gwen: Brandon Royal defeated Davina Leone on “In the Night” (Davina stolen by Adam) | From the start, Brandon struggled with the high notes on the Weeknd hit. Davina struggled with sounding too sweet, too shy, but that seemed like a challenge more easily overcome. (If you can’t sing high enough, you just can’t, right?) In their battle, Brandon’s experience showed. He’d worked out his trouble spots. He at times sounded like he was straining a bit; still, he got there. Davina continued to seem a little uncomfortable with the sexpot role in which Gwen and mentor Celine Dion wanted to cast her. But she sang like a woman possessed — or, since Adam used his last steal on her, re-possessed might be the better word.

So, who did you think gave the best performance of the night? (Lilli sang… enough said for me.) Of the battles overall? (Chris Blue vs. RJ Collins might have been my fave.) Hit the comments.