On top of everything A.D. is plotting, it seems that Pretty Little Liars‘ spring premiere — airing Tuesday, April 18 at 8/7c on Freeform — has an ex-tra surprise in store for Aria.

New photos from the episode — the first of the series’ final 10! — give us our first look at Aria’s reunion with Holden Strauss, last seen waaaaay back in Season 3. (You remember him, right? Aria’s old friend? I want to say he was in some sort of fight club?) Anyway, he appears to have turned his life around at some point during the show’s collegiate time jump, and now he’s giving Aria a (business?) card during a meeting on a park bench.

But before you start thinking that Aria might be sneaking around with Holden behind Ezra’s back, the new batch of photos includes a shot of Ezra and Holden shaking hands… somewhat awkwardly, which is to be expected.

Third point: Lest you think I’m just trying to stir up drama by saying “Ezra Hits the Road” in my headline, behold this ridiculous picture of Ian Harding owning the streets of Rosewood with  Ashley Benson’s sweet new bicycle: 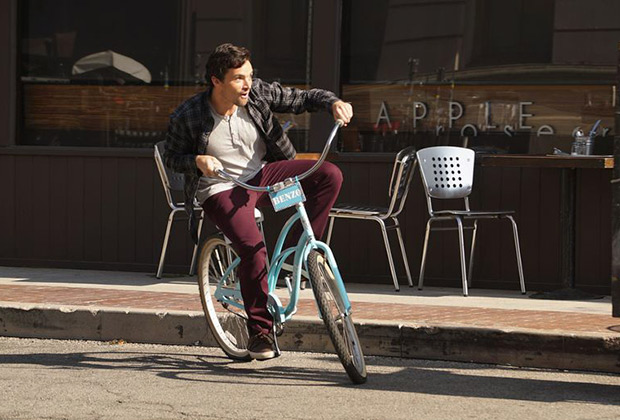 Browse the new photos in our gallery — you can click here for direct access — then drop a comment with your hopes for the final 10. How do you want Pretty Little Liars to end?