Legends of Tomorrow‘s “Doomworld” was a fun place to visit, but I’m not sure I would want to live there.

Sara, Mick, Ray et al, however, may have little say in the matter.

Living as Eobard Thawne’s “pets” in this new reality, rewritten by the Spear of Destiny, Sara and Amaya are assassins for the Legion of Doom, Ray is a janitor, Jefferson is bullying lab rat Stein into doing Thawne’s bidding and Nate is a horribly coiffed conspiracy theorist wise to this “wrong” reality.

Mick meanwhile has partnered back up with Snart, though even that seems “wrong,” seeing as Captain Cold gives Heat Wave the cold shoulder when he asks for details on the bigger picture. Mick thus bails on Snart and their assignment to of Nate, then grabs is mulleted friend to reunite with Ray, who luckily has been dabbling with gizmos to create a “transreality multiplexer” — aka a gun that pulls a “control-Z” on new memories. Just as Nate and Ray return to their old selves, Sara and Amaya arrive to do them in, though the former gets “zapped” back to reality in the nick of Time. Sara goes “undercover” back at Mayor Darhk’s HQ, but is found out soon enough. Darhk, now wielding magic again, is about to kill the traitor 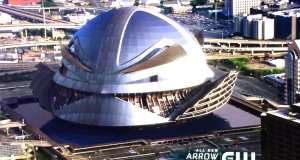 when Sara zaps Amaya back to her senses, and the ladies escape.

Gathering in Nate’s mom’s basement (where they gnosh on apparently amazing sandwiches), and with Jefferson now back to his old self as well, the Legends plot to infiltrate the Hall of Doom (!!!!!!!) and destroy the reactor that Stein built for Thawne, for the purpose of incinerating the Spear. Alas, a wary Stein waylays their plan, allowing Thawne to arrive on the scene and dangle the Spear over the fiery pit. But then the other Legion of Doom members arrive to thwart his plan, and a game of “follow the Spear” ensues, as it falls from hand into hand into hand. Mick ultimately winds up with it, but when taunted by Snart, he lobs it to Amaya to activate. Before she can finish the Aramaic instructions, Snart ices her, and then shatters to pieces her frozen form. The Legends are agog, but left with no play — especially after Thawne proceeds to destroy the Spear.

Reconvening in momma Heywood’s basement, the Legends surmise the only way to right things is to time-travel to 1916 and stop the Legion from ever obtaining the Spear. Though to do that, they need to track down Rip — who unbeknownst to anyone has just brought the Waverider back online… in Thawne’s S.T.A.R. Labs office, where the vessel is a miniature on display!

Before we go, let’s take stock of some of the fun “Easter eggs” throughout the episode, including: 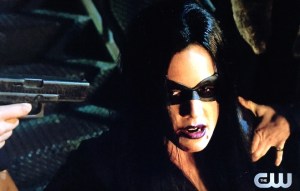 * As spoiled, (a brunette) Felicity Smoak, wearing a mask and costume, was as a vigilante “pest” who eventually got her neck snapped by Sara. (Why this wasn’t kept a total, fun surprise, we may never know.)

* In Doomworld, Malcolm’s wife and son are alive and well, daughter Thea “adores” him, and League of Assasins boss Nyssa al Ghul is living a closeted life in Ohio. (So much ouch!)

* Darhk has a collection of “trophies” of the heroes who have been felled — including Green Arrow, The Flash, Spartan, Wild Dog and Ragman.

* Donald Trump is president in Doomworld. (Not sure that is a spoiler of any sort?)

What did you think of Season 2’s penultimate episode?