ABC’s Imaginary Mary is trying something new: adding an animated CGI character to the cast of a live-action series. And like a lot of Hollywood stars, that CGI character went through a few nips and tucks on the way to primetime.

In the new midseason comedy (debuting this Wednesday at 8:30/7:30c), Jenna Elfman stars as Alice, a career woman whose imaginary friend from childhood, Mary (voiced by SNL alum Rachel Dratch), suddenly reappears in her life. Mary’s always helped Alice through hard times, and she’s back to help her cope when Alice’s boyfriend Ben (Broad City‘s Stephen Schneider) introduces her to his kids. 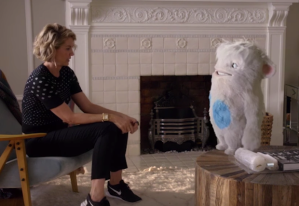 Mary’s look “went through many iterations and napkin sketches and conversations,” executive producer Patrick Osborne told reporters at a recent press event. Osborne, an Oscar-winning Disney animator (Tangled, Wreck-It Ralph), did the original design of Mary before Elfman had even been cast, and at first, Mary looked more like a hairy, pillow-shaped troll, matching her mischievous nature. (See the original design at right.)

But when the show’s scripts started coming in, and they softened Mary’s personality, that led to a revamp of the creature’s look. “The writing went away from the little monster that it was… we realized we wanted that character to be likable,” Osborne recalls. So he turned to an old pal: “I called a favor in to a friend at Disney, Nick Orsi, who tore apart my initial drawing and made it better.” The result: a much cuter Mary, with big eyes and a more kid-like appearance, as seen in the photo at the top. (Still hairy, though.) 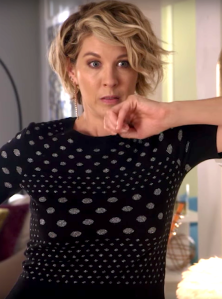 So how does Elfman shoot scenes with her imaginary co-star? “When we’re rehearsing and blocking the scene… we have a great puppet,” she reveals. “A real Mary puppet, with a puppeteer who moves her through the space.” Dratch isn’t on the show’s Vancouver set with Elfman — she records Mary’s dialogue in New York — but a comedic actress who’s local to the set reads Mary’s lines with Elfman offscreen: “She’s really funny, so I feel like I have a comedic partner in that exchange.”

When it’s time to shoot, “we film one take with the puppet moving through the space with the puppeteer, so the animators have that sense of her,” Elfman says. “Then she goes away, and then I’ve got nothing. No green screen, no green ball, zero.” Elfman has to remember where Mary is in the scene, based on the blocking they rehearsed: “As soon as she starts coming towards me or moving through the space, I just have to remember those points in space. And sometimes there are eleven of them.”

Keeping all that in mind — along with, you know, acting — is a big challenge, Elfman admits. “But that’s why I was interested in it… It was like, ‘This is just a nice, new bag of tricks I get to practice and see how to do.'”

Press PLAY below to get a sneak peek at Imaginary Mary, and then tell us in the comments: Can you imagine yourself watching?