The following contains major spoilers from this week’s episode of The CW’s The Flash.

This week on The Flash, one team member went to great lengths to save another — with major ramifications for all involved.

Toward the close of an hour in which Barry & Co. debated letting the Earth-19 villain-from-the-future Abra Kadabra (played by MacGyver‘s David Dastmalchian) run free, in trade for intel on Savitar’s identity, Caitlin was critically injured/Tommy Merlyn’d by an explosion conjured by the magic man. 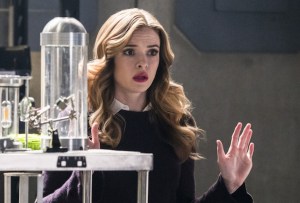 A supine Caitlin guided Julian through surgery on herself, but when she later suffered a setback, Julian removed the pendant that keeps her metahuman powers at bay, in hope that they could save her.

“Caitlin is on her last legs on the operation table when she suddenly flatlines, so we try and resuscitate her,” Tom Felton recounts. “We give her compressions. We even give her the old electric shock trying to start the heart, and none of it works. We actually accept that she’s dead, but in the very, very final moment, Julian grabs the necklace off of her and immediately she comes back to life, because her Killer Frost genes are very strong.”

Strong, indeed. Julian’s life-saving decision was not met with cheers but jeers, given the chilling beast it dared to unleash. “Cisco in that moment straight away says, ‘How dare you do that? She didn’t want [powers],'” Felton says. “I think the rest of the team would’ve rather stuck to Caitlin’s wishes and allowed her to die.”

Instead, as glimpsed in the final seconds as a full-tilt Killer Frost blows away her buds with a cold blast, kindly Caitlin has perhaps been overcome by her alter ego for good (meaning, for very, very bad). It’s quite possible that none of the “pep talks” that brought her back will work this time. “She’s full-blown nutter, so we have to rely on some pretty severe methods to try and stop her,” Felton previews of the weeks to come.

In pulling out all the stops to save Caitlin, Julian of course 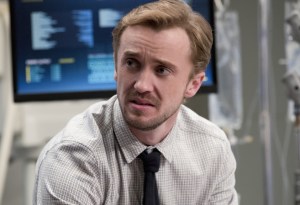 was coming from a place of deep affection, having had grown close to the S.T.A.R. Labs scientist until her actions led him to believe she had another reason for inviting him aboard Team Flash. “For a long time, Julian thought that he’d been brought into the group or his skills and for his assets, and then he realized that maybe she’s had her own prerogative the whole time,” Felton recalls. “So, yeah, he was definitely feeling a bit conflicted with his feelings, whether he really belongs in the group and whether he’s able to believe Caitlin.”

This week, though, Caitlin apologized for failing to see that she could hurt Julian just as much as herself, as as Killer Frost.

During our chat with Felton on the Flash set, the actor was invited to reflect on his segue from love-to-hate Harry Potter villain to workplace adversary for a post-Flashpoint Barry, on a smaller screen.

“It’s an incredible body of work, [producing] 23 episodes in a very short time. So to work with such a skilled cast as well as crew is something to behold,” he shared. “Everyone manages to work like an incredibly well-oiled machine.”

As for whether his time on TV’s The Flash thus far has made an impression, the answer is an unequivocal yes. “I’ve learned so much here,” Felton attested. “It’s quite a different skill set to be able to say, ‘Here’s a [movie] scene, and we’re going to spend all day doing the scene’ versus saying, ‘Here’s six scenes, every day for the next nine months or whatever.’ Making these scenes good, and under the very, very short amount of time space, is not something I was particularly used to, but working with the boys and girls here…. Obviously, they’re all so incredibly professional, so within 10 minutes of reading a scene off the page, it actually feels like a fully-flourished scene.”