A blazing Black Crowes redo. An overnight transformation. Rehearsal-room drama. Robyn unplugged. Hmm. Night 3 of The Voice’s Battle Rounds must’ve been pretty decent, especially for what you’ve mentioned is a subpar Season 12, because by the end of it, even Adam Levine’s Gwen Stefani-blond ‘do was starting to grow on me. Let’s review Monday’s performances, shall we, then you can play favorites in the comments.

Team Adam: Johnny Hayes defeated Julien Martinez on “Hard to Handle” | In rehearsal, Johnny seemed to own the song from the word “go,” while Julien, coming from a theater background, stumbled slightly, as he was focused too much on enunciating the lyrics. Come battle time, Julien, nervous as he looked, came out growling. But still, Johnny appeared to have swallowed the song whole and was then spitting it back out like a fire-breathing dragon. His vocal was scorching. He also looked so natural working the stage, it could have been his living room.

Team Blake: TSoul defeated Josh Hoyer on “In the Midnight Hour” | As comfy as the guys’ coach hoped to make them by choosing the Wilson Pickett classic, they struggled with harmonies in rehearsal. Come showtime, however, the self-proclaimed soul brothers had their s— together. Josh sang from the gut, exuberantly smacking an exclamation point on every note. But TSoul’s runs were locomotives in motion — absolutely unstoppable. Moreover, his voice is unique. As well as Josh did, you’ve heard other singers like him (even this season, on this show). On the other hand, his teammate is, as has been said over and over, one of a kind. 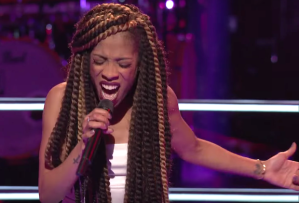 Team Alicia: Vanessa Ferguson defeated Autumn Turner on “Killing Me Softly” (Autumn stolen by Adam) | The challenge for Alicia’s R&B-pop and R&B-soul songstresses in rehearsals was to adhere to the oh-so-familiar melody yet still find a way to sound different, like themselves. Neat trick. But they seemed up to the task, especially Vanessa, who even got smiley while practicing with the band. On stage, Autumn at first danced more than was perhaps advisable to nail a solid vocal, and Vanessa gradually pulled ahead — to me and Alicia, anyway — delivering stronger long notes than her teammate and, ultimately, the more memorable performance.

Team Adam: Malik Davage defeated Kawan DeBose on “Love Me Now” | In the gents’ first rehearsal, mentor John Legend suggested that Malik take the runs down a smidgen, and Kawan, turn up the volume a bit. (Oh, and mind the lyrics. This wasn’t “Hard to Handle.”) At Kawan and Malik’s second rehearsal, Adam called them out for being unprepared. (Yikes!) On stage, they seemed to have finally worked on their harmonies. And, though Malik did fine, he just did fine. And once Kawan unleashed that falsetto of his, it was all over. Or so I thought. Not only did Adam stick with Malik, no one stole Kawan. (Wha?) 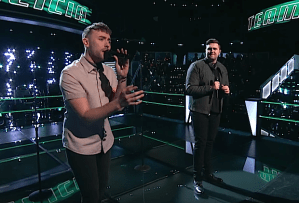 Team Alicia: Jack Cassidy defeated Hunter Plake on “Dancing On My Own” (Hunter stolen by Gwen) | Nice that, as Jack offered up during his and Hunter’s critique, they’re besties, since they often looked right at each other while singing this bare-bones, ballad version of Robyn’s synth-pop hit. Otherwise, it could have been as awkward as a full-grown woman dueting on a mature song with a kid (a la Felicia Temple/Quizz Swanigan). As for the performance, the fellas scored anytime they got to howl in romantic angst, Hunter’s Nate Ruess impression continued to, well, impress, and when Jack let loose, he won even me over.

Team Gwen: Stephanie Rice defeated Caroline Sky on “The First Cut Is the Deepest” (Caroline stolen by Blake) | Coach Stefani seemed to be stacking the deck in Stephanie’s favor by assigning her and Caroline a song previously sung by Sheryl Crow — that was going to come about as naturally to the poised, polished teen as wearing denim would have to Lady Mary Crawley. But, during the battle, Caroline pulled a full-on Sandy-in-Grease transformation, uglying up her voice just enough to be serious competition for Stephanie, whose visceral vocals predictably slayed.

Via the dreaded montage treatment, we also learned that Enid Ortiz had defeated Valerie Ponzio on “Love Triangle” to stay on Team Blake, Hanna Eyre had outsung Sheena Brook on “Try” to remain part of Team Adam, and Troy Ramey bested Jozy Bernadette on “Angel Eyes” to retain his spot on Team Gwen.

So, who do you think gave the night’s best performance? (For me, Stephanie.) Which coach’s decision was the biggest head-scratcher? (Malik over Kawan? No steal for Kawan?) Hit the comments.