This week on ABC’s Once Upon a Time, Regina and the Evil Queen had a duel to the “death,” while Hook embarked on a most unexpected voyage.

Upon making the acquaintance of the Wish Realm’s Robin, the Truly Evil Queen scoffed at his idea to get a new start in New York. Rather, she offers him return passage to the Wish Realm, in trade for his help in digging up the Shears of Destiny, with which she plans to sever her tie to — and then destroy — Regina.

To that end, the Evil Queen sends through Henry a copy of Page 23, indicating that she has Wish Robin and plans to do him harm. Regina in turn rushes to the mayor’s office to briefly find a tied-up Robin, who promptly vanishes, leaving the shears-wielding sorceress in his place. Regina accepts that the town isn’t big enough for the both of them and invites her doppelganger to “trim away,” and she does just that. The ladies then duke it out, trashing the office in the process. Regina emerges triumphant, though, but rather than crush her twin’s plucked heart, she pops out her own ticker and “blends” the two, giving the Evil Queen’s a pinch of her love, and taking back some of their darkness: “I’m going to be brave for both of us, and choose love over hate.”

After the magical detente, the Evil Queen assures Regina that Robin was returned to his realm, alive and well. When EQ asks Regina if she regrets not walking through that tavern door long ago to meet her soul mate much earlier on, Regina insists no, because she would have never found Henry, family or Storybrooke. When Regina loops in Snow, Zelena and Henry on the Evil Queen’s change of heart (no pun intended), the former two are skeptical, until the contrite sorceress shows up and apologizes for all she did to Snow in the past. (And to that end, she has given Regina some leads on how to undo the Charmings’ sleeping curse.) Regina then gives Henry the OK to use his Author powers to write the Evil Queen into somewhere she can get a fresh start — and she lands outside the Wish Realm’s Tavern, which she enters to buy that Robin a drink (though he insists on grabbing the first round). 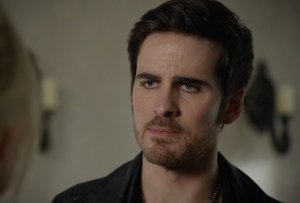 Captain Nemo conveniently resurfaced to lend an ear to Hook, who is troubled by the secret he is keeping, even now after being engaged to Emma. Nemo warns that guilt is as corrosive to the soul as revenge, so Hook should seek forgiveness. Alas, Emma catches Hook revisiting his memory of killing David’s father using a dreamcatcher. (D’oh!) “Did you really think you’d lose me after everything we’ve been through?” she marvels. She then shares her disappointment that “you didn’t lean on me, you didn’t trust me,” that we are to “stop hiding things.

“The man I love would know that. That is what I agreed to marry. And until you’re ready for that…,” she lamented, handing back the engagement ring. Hook prepared to rejoin Nemo’s crew to get away from the site of his crushing loss, until he heard from Snow that the Truly Evil Queen was able to finagle a happy ending (“Love can save even the darkest of souls”), and that gave him hope anew. But when Hook boarded the Nautilus to inform Nemo he wouldn’t be joining him after all, the sub submerged nonetheless, having been commandeered by Gideon.

“For what I have planned, you can’t be in Storybrooke,” the hooded one told the Savior’s love before poofing away, while Emma in her empty house was led to believe that the pirate had bailed on her.

What did you think of the episode “Page 23” and the unfortunate underutilization of Rose McIver’s Tinker Bell in a rote, predictable flashback?