In Sunday’s FEUD: Bette and Joan, the stars of What Ever Happened to Baby Jane? braced for failure. But, as you well know, the movie was anything but a flop. How did Davis and Crawford, as accustomed as they were to being counted out, handle the success? Read on…

‘I COULDN’T HAVE DONE IT WITHOUT YOU’ | As “More, or Less” began, Bette and Joan were learning just how little the pre-release buzz on Baby Jane was doing for their careers. After Bette’s baby-faced new agent suggested that hey, dinner theatre is chic again, she went so far as to place a tongue-in-cheek “Situation Wanted” ad. And when Joan’s table full of reps informed her that no offers were coming in — but if any did, they’d be happy to field them — she fired the lot of ’em. As the final cut was completed, Bob irritated Pauline — who still smartly had faith in the pic — by predicting that its upcoming sneak-preview screening would be only marginally more pleasant than a “public execution.” He even warned Harriet that, since he bankrolled the flick, they might have to sell the house. What about the kids? “We’ll sell them, too,” she suggested good-naturedly. (How did that bastard cheat, and so regularly, on this gem?)

Later, Pauline visited not Joan but Mamacita — right-hand lady to right-hand lady — to see if she’d pitch her employer a script called The Black Slipper that the wannabe director had written especially for Crawford. Unfortunately, when the housekeeper brought up the subject with Joan, she first asked who Pauline was — “You’ve met her over 50 times,” Mamacita snapped — and then scoffed at the notion. “A woman director? It really is over.” While Bette was away visiting Margot, her co-star attended the sneak preview, and to her and Bob’s astonishment, the response was overwhelmingly positive. Before you could say “comeback,” Joan was being applauded everywhere she went, and Bette was gamely singing the theme song on The Andy Williams Show.

‘I’VE GOT A SOFT SPOT FOR LOSERS’ | Behind closed doors, Joan still wasn’t happy. The reviews had been good, but the Times hadn’t dug her performance. So she was sure that if anyone from Baby Jane got an Oscar nod, it would be Bette. The Academy wouldn’t dare nominate her and not you, too, Hedda insisted. “Yes, all right, she plays a lunatic, but you play a cripple!” She also refused to even read Pauline’s script, informing the younger woman that she wasn’t turning her down because of her gender but because, at that stage in her career, she wasn’t about to gamble on a nobody. “My last chance,” Joan said, “is not going to be your first.” Meanwhile, Bob balked when Jack wanted him to do more movies like Baby Jane; the director yearned to do a Western and wouldn’t accept any project that didn’t challenge him. “No offense,” Jack said, “but you’re strictly B-list.” So he let the director walk, certain that he’d come crawling back.

Though Bette was having a grand time promoting Baby Jane, Joan wouldn’t play along. Imagining that Jack was pushing her rival for an Oscar rather than her, Crawford stayed home and drank. And drank. And drank. Do what you want, Warner grumbled. But, since Joan had a stake in the movie, when the nominations came out, he still wanted her out there “shaking hands and sucking [bleeps].” After catching Bette on The Jack Paar Show, joking that Warner had thought the old broads couldn’t open a movie, Joan phoned her — soused, of course — and demanded she stop referring to her as an old broad. Genuinely feeling bad about the state Crawford was clearly in, Bette reminded her that half of the movie’s success was hers. “Then I would appreciate it,” Crawford spat back, “if you would enjoy it half as much.” 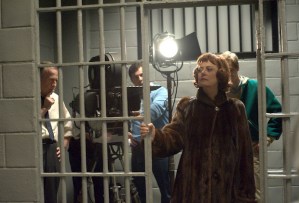 ‘IT’S A NEW WORLD, PAULINE’ | With Sinatra making Bob’s life miserable on the set of his Western, Pauline slipped her boss The Black Slipper, pleaded her case to direct and asked if he’d produce. To her delight, he said yes! Alas, Bob passed out promises like new dads do cigars — a point driven home when he visited Bette, who, in spite of Baby Jane’s success, had been reduced to guest-starring on Perry Mason. They could turn that around, though, she suggested. She had a script in mind for him to direct her in… only he turned her down. If the offers didn’t come rolling in after the Oscar nominations, he vowed, he’d write her a new hit. (To which even she replied, basically, “Yeah, right.”) This made it especially satisfying to see how hellishly Sinatra treated Bob on the set of the Western. (The director had it coming, after the way he manipulated Davis and Crawford.)

Aware of the on-set strife, Jack called in Bob, apologized for their last meeting and said that, if he’d direct another hag flick starring Bette, he’d release the Western that Ol’ Blue Eyes was mutilating. With no choice, Bob agreed, then made the mistake of asking Warner if he thought he had the potential for greatness. Uh, no, Jack didn’t think so. Off that wound to his pride, Bob was in no mood to be yelled at by Pauline, who’d discovered that Sinatra’s script notes were written on the backs of pages from her screenplay! “I’m not a miracle worker,” he barked at her. “You’re in fantasy land” if you think you’re going to direct. So she could keep on being his assistant or take a hike. Later, Mamacita encouraged Pauline not to give up, pointing out that, statistically, women would soon outnumber men, which meant that Hollywood would be obliged by its wallets to start making movies about women, by women, for women. (If only… ) “Your day is coming,” she told Pauline. Finally, as the episode drew to a close, Joan awakened on Oscar-nomination day to find all of her phones off the hook. Why? “Miss Joan,” said Mamacita, “I want you to sit down.” Then, from outside the mansion, we heard Crawford’s despairing shriek.

So, what did you think of “More, or Less”? Susan Sarandon’s rendition of “What Ever Happened to Baby Jane?” Check out the original below, then hit the comments.