RuPaul’s Drag Race returned for its ninth season Friday (now on VH1!), introducing fans to a sickening lineup of 13 new queens — plus one you might recognize.

I say you “might” recognize her because, honestly, I’m not sure who she is. Her arrival was saved for the final minute of the episode, and before her face was revealed, we were given a big, fat “To Be Continued.”

With that 14th contestant still a question mark, let’s talk about the queens we did meet in this week’s premiere, which — surprise! — didn’t contain a single elimination. (I won’t lie, that was not my favorite twist.)

Personally, I’ll be keeping an eye on two very different queens for two very different reasons. The first is Nina Bo’nina Brown — winner of the Miss Charisma, Uniqueness, Nerve & Talent pageant — for not only finding a way to work “Osama bin Laden” into her full name, but also for giving me nightmares with what looks like a Snapchat filter come to damn life: 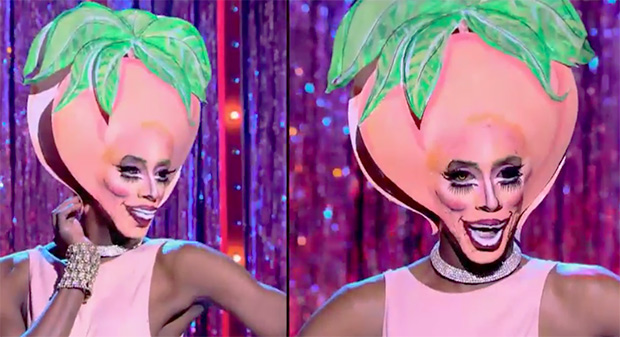 My other Queen of Interest this season is Eureka, who came out swinging (“Eat me!”) while meeting the other contestants. But less than a minute into the arrival of guest judge Lady Gaga, the Tennessee native completely dropped her defenses, sobbing and thanking Miz Germanotta for pulling her out of situations in which she was “close to death.” It was equal parts touching and surprising — the kind of moment that only Drag Race can deliver.

As for my picks to be eliminated first, I’m going with Aja and Jaymes Mansfield — but only for being kind of unmemorable. (Side note: As someone who was never a huge fan of Ross Matthews, I have to admit, he really won me over with his judging quips. He’s a quick one.)

OK, time to weigh in: Who are your favorite — and least favorite — queens this season? And who’s the mysterious 14th contestant? Cast your vote(s) below, then drop a comment with more of your thoughts.