Before we get into Philip and Elizabeth’s Nashville cosplay — and the guy who wishes he never met them — this week on The Americans, we have a more pressing matter to discuss. 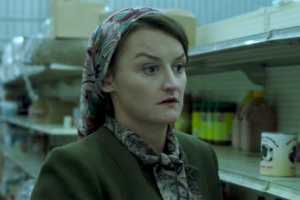 Martha’s alive! Yes, after a half-season of keeping us in suspense, the FX spy drama confirmed that our favorite hard-luck FBI secretary (aka “Poor Martha”) survived getting shipped off to the USSR by her “husband” Philip. After Oleg met with a Moscow grocer this week about her suspiciously fresh produce, he walked through her market… and right by Martha, clad in a humble babushka. She browsed through a few barren shelves, without saying a word — and that’s all we saw of her.

So what does this mean? Oleg didn’t see her, and as far as we know, he doesn’t know Martha, even though they have a mutual friend in Stan Beeman. But I have to think their paths will cross at some point. (Or else, why show her?) And will this lead to Martha being reunited someday with her beloved Clark Philip? I’m just happy to see she’s still alive. See, The Americans does give us a happy ending sometimes! (OK, “happy” is probably a strong word.)

Elsewhere in “The Midges”:

* Philip and Elizabeth put on their best Urban Cowboy gear to investigate an Oklahoma insect lab that’s connected to the U.S. plot to destroy Soviet grain supplies. There, they bumped into a lab technician who confessed to breeding thousands of bugs and shipping their eggs to a shadowy corporation called Agricorp. But he never asked what they were using the eggs for, and Elizabeth told him, “You should’ve asked”… right before Philip snapped the guy’s neck. 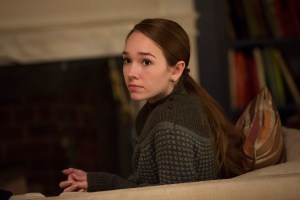 * Paige got another lesson in espionage when her parents let her in on their current mission to infiltrate that family of Russian immigrants. That just added more stress to Paige’s life, but when Matthew asked her what was bothering her, she used that thumb-forefinger trick Elizabeth showed her and put on a smile, assuring him that it was nothing. Your parents know a lot more neat tricks like that one, Paige — although, to be fair, a lot of them involve snapping necks.

But really, the big takeaway this week is Martha’s shocking (and very welcome) reappearance. Do you think she’ll see Philip again this season? (Remember, we’ve still got ten episodes to go.) And did you audibly gasp when she appeared on screen, like I did? Please report directly to the comments, my comrades, and share your thoughts.