The following contains spoilers from this Tuesday’s episode of The Flash.

As The Flash‘s musical crossover with Supergirl drew to a close on Tuesday night, the CW series served up a coda that, as promised by cast members, was “beautiful” in every way.

Having been rescued from the Music Meister’s alternate reality by the power of love, Barry returned to the loft and cued up one last tune — the ballad “Runnin’ Home to You,” which he sang to Iris before proposing anew, and successfully.

The re-proposal was “very, very sweet,” Candice Patton told TVLine during our recent visit to the set. Couple it with “a beautiful song” penned by La La Land‘s Academy Award-winning Benj Pasek and Justin Paul, and you get a moment that was “just simple and so romantic,” the actress adds. “I liked this proposal better than the one that we’ve already seen.”

Series lead Grant Gustin tells TVLine that Barry popping the question again was “really easy in a way,” teed up as it was by such an apropos tune. “What I love about musical theater is that it really elevates 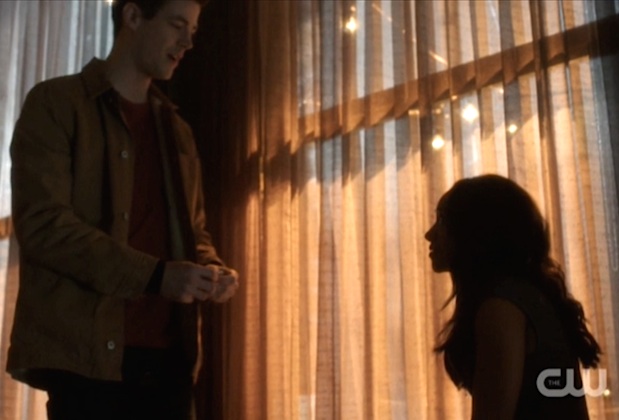 everything. It makes you feel what we want you to feel in a more easy fashion.”

Pasek and Paul — whom Gustin has known since they held a workshop at his college years ago — “wrote a near-perfect song,” says the Flash star. “They clearly knew the background of the relationship and the characters,” so much so that “I think it could be a theme song for Flash, honestly. I felt very lucky to sing it, and I think it did a lot of the work for me, in a way.”

Perhaps, but there should be no discounting Gustin’s performance during the emotional climax, while Patton with little effort reflected the look of a woman falling in love to a brand-new degree, as the ballad’s beneficiary. “It did feel special to shoot,” Gustin says. “No one had heard the song yet, no one had heard me sing it…. Candice had never even heard it [and] she was in tears after the proposal in the rehearsal. It got a round of applause from the crew, which doesn’t happen. It was a special episode for everybody.”

As for what’s next for fiancé and fiancée, it’s only understandable that actual wedding bells might be a ways off, while Team Flash continues to do what it can to keep the bride-to-be alive and all!

“The only time we really see wedding planning brought up, it’s in the sense that we haven’t been focusing on it,” Gustin shares. “[Saving Iris] is obviously an all-consuming thing: How do we beat this? How do we prevent this from happening? So, we see Barry and Iris get back to their relationship, but it’s tense. It’s a hard time for both of them right now.” (With additional reporting by Vlada Gelman)

The Flash – Music From The Special Episode: Duet is available on iTunes.