Tuesday’s penultimate Bones — the first part of the series’ two-episode swan song — ended with the lab being blown to smithereens by Booth’s vengeance-seeking nemesis Mark Kovac. Pretty much all of the show’s series regulars were inside the Jeffersonian when the bombs (yes, there were multiple devices) detonated, including Booth, Brennan and parents-to-be (!!) Angela and Hodgins.

The explosion came at the conclusion of a time-twisty installment that centered on two key events: Cam and Arastoo’s very well attended wedding reception and Zach’s mini-trial and subsequent exoneration (the ex-squintern will nonetheless have to serve out the final 13 months of his sentence).

Below, co-showrunner Michael Peterson provides TVLine with a preliminary casualty assessment (“Have faith!”) and previews next week’s last episode ever (until the revival, that is).

TVLINE | Of all the people to get trapped in the lab during the explosion it had to be the series regulars. What are the odds?!
[Laughs] Hey, Cam got out!

TVLINE | Fair enough.
Brennan gets delayed because she’s worried about the evidence. Booth isn’t going to leave without her, and neither are Hodgins and Angela. Ultimately, it’s really about family. Everyone is doing their part to keep the family together and that ended up putting them in danger.

TVLINE | I know you’re not going to reveal who, if anyone, dies. But does next week’s finale pick up right where this cliffhanger left off?
Yes, we come right back into it.

TVLINE | Where did the idea for the episode’s unusual structure come from?
We had all these loose threads with the characters and it seemed like an opportunity to give everyone their due. We have a six-act structure on the show and we have six main actors, so it just made perfect sense. I was also partly inspired by a great House episode [Season 6’s “9 to 5”] that was told from Cuddy’s point of view.

TVLINE | Cam and Arastoo’s wedding reception was packed with returning favorites. What were those days on set like?
It was fantastic and heartbreaking at the same time. We loved all the people we were able to get, but it was tough because some people weren’t available to return. Two episodes ago, [squintern] Rodolfo said, “I’ll be at your wedding!” And then he’s not there. And that’s because [Ignacio Serricchio] was booked. But it 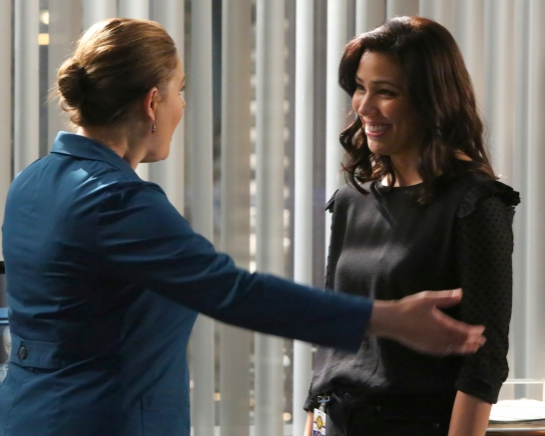 really was our aim to have everyone there.

TVLINE | Can you give me another example of one or two folks you would’ve really liked to have gotten back for these last two episodes?
In retrospect, I wish we would’ve done more with [Booth’s son] Parker this season. And a lot of people ask about Brennan’s brother… But we had 12 episodes. We did the best we could. You also have to deal with the finances of it; nobody comes back for free. [Laughs] Hopefully people will embrace who did come back rather than pay attention to who wasn’t there.

TVLINE | Angela revealed that she and Hodgins are expecting. How long has that little twist been in the works?
Probably since the start of Season 11. Once we [settled] everything with Hodgins [and his paralysis], we wanted the audience to come away feeling hopeful. Bones is ultimately a very hopeful show.

TVLINE | And yet poor Zach has to serve 13 more months in prison..
[Laughs] It’s a careful balance. We want to be somewhat realistic. We did want to put some verisimilitude in there.

TVLINE | The show is in a very dark place as it heads into the final episode next week. Any message for fans?
I [understand] if people are worried. But this is Bones. Have faith.