Now being held captive by the unmasked Prometheus aka Adrian Chase, Oliver Queen will not so much go toe-to-toe with his season-long adversary as much as “chain-to-chain,” says Arrow star Stephen Amell.

Offering a taste of what’s to come, prior to the #DCTV stars holding court at last weekend’s PaleyFest, Amell said while this Wednesday’s episode is titled “Kapiushon'” — the Russian word for “hood” — “it could literally be called ‘The Deconstruction of Oliver Queen. It’s pretty gnarly.” So much so that Amell copped to feeling “incredible levels of anxiety” during filming. “I felt like if there was a misstep, it might be something we couldn’t come back from,” he said.

Coming out of his first episode of captivity at Adrian Chase’s hand, Oliver will be “very changed,” Amell shared. “And resolute, but in the wrong way. Like, resigned.” After all, as has oft been made clear, “Chase isn’t trying to kill him. Chase is trying to sell him something, and Oliver buys it. And that causes a lot of problems within the team.” 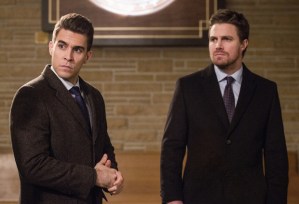 “I don’t think it’s a secret that anyone is expecting,” the EP added, “but it’s going to have ramifications for the remainder of the season, if not the whole series.”

Surveying Amell’s work opposite TVLine Performer of the Week runner-up Josh Segarra, Guggenheim effused, “It’s basically a stage play between [them], and it’s spectacular. Those two guys on screen are so good, you actually don’t want to cut away. We were saying we almost could have done an entire episode with just these two guys in a room talking to each other.”

“I don’t know if I’ve ever worked so hard on an episode before, aside from maybe the second episode of the entire series,” Amell said of the intense hour. “I was just in everything.” (With reporting by Vlada Gelman)