For a show about time-hopping, Time After Time has been quite stationary following its premiere jaunt to modern-day Manhattan. But that all changes with this Sunday’s episode (ABC, 9/8c), in which H.G. Wells and Jane take the time machine for a spin to 1980.

There, the duo find themselves in the Long Island childhood home of a three-year-old Vanessa. The future business mogul is “the whole thrust of the story,” executive producer Kevin Williamson says. “Everything’s based on Vanessa Anders and her lineage, and we see how Wells intertwines into that. It’s a big, huge, epic melodrama [about] these two warring families.” 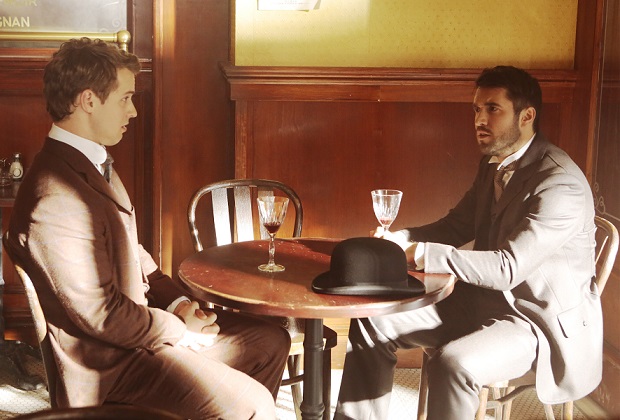 John, meanwhile, takes his own joyride to 1918 Paris, France, in the following Sunday’s outing. “He goes in search of his backstory a little bit,” Williamson previews. “We open him up, and you see what makes him tick, and what kind of Achilles’ heel he may have that has power over him. It humanizes him, in a way.”

Adds his portrayer Josh Bowman: “There was something that was an emotional attachment to [John] that he goes in search for. In that episode, you see somewhat of a redemptive quality in the character.” (Don’t worry, the show is not out to make Jack the Ripper into a cuddly serial killer. “He’s not on a redemptive path by any means, but we layer him enough so that you understand him,” Williamson notes.)

As for more journeys into to the past — or the future, for that matter — they will be sporadic, as the series is “all present day” with “three or four” time-travel trips, Williamson says. Rather than relying on that storytelling device too much, “we open up the H.G. Wells playbook, and we start pulling from his greatest hits,” the EP explains. “The idea is that you see the inspiration for all his [novels]. You’ll start to see little elements of The Invisible Man. In a lot of ways, Griffin in The Invisible Man is a lot like John in terms of his character and his backstory.”