Just as Jane is shocked to realize at the end of What Ever Happened to Baby Jane? that she and Blanche had wasted years when they could have been friends, Sunday’s FEUD: Bette and Joan made it clear once again that Davis and Crawford also could have been pals — and, in fact, could have really used one another’s support, especially in dealing with their children. What put the co-stars and single moms at odds this time? Read on.

‘GIVE HER A PAIR OF YOUR SHOES AND LET HER WALK AROUND FOR A WHILE’ | As “Mommie Dearest” began, Joan caught B.D. teaching her twin daughters how to smoke and advised the girls, next time, to issue a “crisp good morning and keep moving.” Soon, it was obvious that she intended to keep her younger children… well, children past the point when they were really little kids. As for Christina, who was off opening in a play, she was already persona semi-non grata. At first, Mom didn’t even want to send her a congratulatory card. “We’ll see how her reviews are,” Joan told Mamacita, “then we’ll think about sending flowers.” Meanwhile, after Bette and Bob agreed that their tryst couldn’t be repeated, he suggested that they cast B.D. as the Hudson sisters’ neighbor. Bette was sure Joan would object since she had a daughter who actually was an actress. (Ha!) And Christina’s adopted, Bette noted. So “she could be talented.”

Later, Bette invited Joan to have drinks with her to discuss B.D.’s potential casting. In no time, the conversation went deep — like, bone-deep. Joan admitted to Bette that, as a girl, her mother had thrown her out “like a pair of old shoes” and shipped her off to convent school — but not to protect her innocence. She’d lost that at 11, to Mom’s second husband. “I was grateful for any kind of genuine affection to feel cherished,” she said, adding, to Bette’s horror, “I led him into it.” In turn, Bette revealed that, after her father had ditched the family, she had been sent to boarding school. However, until her mother’s death, they had been very close. In fact, “she was my only true female friend,” Bette remarked. At the end of this rare instance of genuine bonding between them, Bette pointed out that “we don’t have to be best pals, just allies.” When Joan suggested that Bette was a shoo-in for a Best Actress Oscar nod, Bette insisted, “I’m going to support this picture even if it means supporting you.” 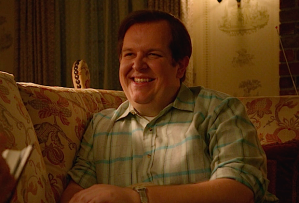 ‘IT’S LIKE MOMMY JUST GAVE ME A NEW PONY’ | Off her evening of revelations with Bette, Joan infuriated Hedda by asking her to cancel the smear campaign against her co-star. But the gossip columnist still ticked off Davis by writing that she was going to submit herself in the Supporting Actress category, leaving Best Lead Actress to Joan. “You said you didn’t care about awards,” Crawford recalled. Plus, “I’ve only got one” whereas Davis already had bookends. Bob tried to point out that “there’s room for both of you to succeed,” but by then, they were beyond hearing it. In other developments, Bette — though perturbed at first that Victor wasn’t really from Broadway — came to see that he was actually quite talented. B.D., on the other hand, was a disaster. She was so bad, in fact, that Bette blew off her request to run lines — eh, “You’ll do your best” — in order to hang out with starstruck Victor, in whom she confided that younger daughter Margot had been diagnosed as mentally retarded and was attending a special school in Maine.

On the set, tensions ran high in the wake of Hedda’s Oscar story. First, Joan and Bette took turns wrecking one another’s takes — and the more difficult the take, the better! — then Davis might have gotten a wee bit carried away during the scene in which Jane kicks her sister. Bob’s reaction: “Did you get it” on film? Things were even worse for Joan at home. With the twins away at camp, she hated returning after a day of work to “this awful silence.” She tried to talk herself into embracing the new empty-nest stage of her life, telling Mamacita that being alone didn’t have to mean being lonesome, but wound up watching TV in bed with her maid before you could say “Mrs. Danvers.” Later, as Joan described to Hedda what a pain Bette had been while shooting the beach scene on location, we saw that it was actually vain Crawford who’d been a handful. Determined to look good, she kept disappearing and returning appearing younger and more made-up than before. (Welcome back, falsies.) Yet it was Bette who received the highest praise. As she danced on the beach, Bob remarked that she looked suddenly younger. Was it the filters on her? No, he said within earshot of a crushed Joan, “it’s the goddamn acting.” 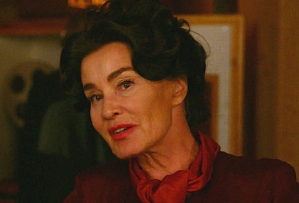 ‘EVERYTHING’S FAIR GAME’ | When Hedda showed up at Bette’s, claiming word on the street was that Joan was stealing the picture and saying she knew all the nasty things she’d done to Crawford during the shoot, Davis called her on her “manufactured concern” and scoffed at the way the gossipmonger regarded herself as a “truth-teller.” Getting nowhere, Hedda threatened to blab that she’d heard B.D. stunk in the movie and might even wreck it. That’s not true, Bette replied, since B.D.’s role isn’t important enough to wreck the movie! Overhearing, B.D. wound up apologizing to her mom for being so lousy. (Don’t worry, Davis replied. “If Crawford couldn’t ruin the picture, nobody could.”) Out cruising one evening, Victor got mistaken for Charles Laughton and picked up. Unfortunately, the gay movie theatre at which he “enjoyed” his date was raided. Since he couldn’t call his own mother to bail him out, he called Bette, who used her star power to spare him a scandal.

Back at the studio, Jack was appalled by the ending of Baby Jane — why did Joan look better the closer Blanche got to dying?!? No way could he open the film wide as was. Bob would have to reshoot the last scene on his own dime. Before he did so, Joan became so desperate to refill her nursery that she went shopping at an orphanage. Alas, “you’re simply too old” to adopt again, she was told. Bette’s heart broke, too, when she phoned Margot to say she’d be there soon for a long visit, and her daughter became distracted and walked away from the phone. Both Davis and Crawford being at a low ebb emotionally, they could really have used an ear to bend, a shoulder to cry on. But once they re-wrapped the beach scene, they went their separate ways.

What did you think of “Mommie Dearest”? Hit the comments.