With Season 1 of This Is Us officially in the books, you might think you know the Pearson family pretty well by now. But maybe you don’t know Jack. (Or Rebecca. Or the rest.)

The cast and producers of NBC’s hit freshman drama hit PaleyFest on Saturday to look back on Season 1… and look ahead to what’s on tap for Season 2. “The great thing about this show is, it’s like a spider web,” executive producer Glenn Ficarra said. “We can go off in all directions.” He hinted that we might see some old characters in a new light in Season 2: “This season, we saw Jack from one direction… we might be able to get him from a few new directions.”

Milo Ventimiglia (Jack) and Mandy Moore (Rebecca) also reflected on Tuesday’s season finale, including that “painful” fight that led to Jack and Rebecca’s separation. Ventimiglia remembered feeling guilty about saying such mean things to his costar: “As kind and nice as Mandy Moore is, I don’t think anyone in her life has ever said things like that to her face.” 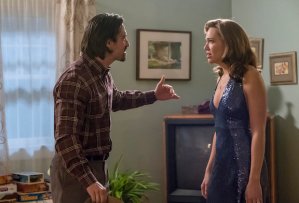 To help bring them together again, moderator Kristin Dos Santos from E! News put Ventimiglia and Moore through an impromptu “marriage counseling” session, asking them to read a scene from another all-time great TV couple: Eric and Tami Taylor from Friday Night Lights. (That could help heal any marriage, right, y’all?)

The cast also addressed the mystery surrounding how Jack dies: When asked which of them knows the truth, nearly every actor on stage raised their hand. (Chris Sullivan, who plays Toby, joked: “It happens exactly how you think it is going to.”) They didn’t reveal anything, of course, but they did nix a popular theory that Jack dies in the September 11th terrorist attacks. Sterling K. Brown (Randall) shot that one down with simple geography: “He’s in Pittsburgh!”

More highlights from Saturday’s This Is Us panel at PaleyFest:

* Dr. K himself, Gerald McRaney, joined the cast on stage, and — in true folksy Dr. K fashion — said that all the awards buzz he’s getting “beats a poke in the eye with a sharp stick. I’m not so much into the results of things. I enjoy the process…. that’s where all the joy is for me. Awards might be nice… I wouldn’t really know.” (What, he never won an Emmy for Major Dad?!)

* On Randall’s sudden desire to adopt a kid in the finale, Brown said, “It’s clearly the beginning of a conversation between a husband and wife. It’s something that’s on his heart, when he reflects on the loss of William… and the gift he had being raised as a Pearson. He wants to bring it full-circle.” He added that “it might be nice” for Randall and Beth to add a little boy to their two daughters.

* Rebecca’s remarriage to Miguel (Jon Huertas) is a sore spot for fans… and Huertas knows it. He joined the cast, too, bringing a “Pilgrim Rick” hat out and presenting it to Ventimiglia as a peace offering. And he said he hopes Miguel can earn fans’ trust: “Hopefully, he’ll prove he’s just as dedicated a husband as Jack.”

* Brown’s real-life wife Ryan Michelle Bathe is a part of the show, too: She plays Yvette, the family friend Jack and Rebecca met at the pool. And Brown hopes to share a scene with her one day: “Maybe she’ll pop up with old-age makeup!”