Rather, it’s become a punching bag for TV critics everywhere.

Currently sitting at 19 percent on Rotten Tomatoes’ Tomatometer, Netflix’s latest Marvel series has been described as “rote and uninspired,” “a paint-by-numbers project” and “shockingly underwhelming.” That’s tough criticism by any standard, but it’s especially disappointing on the heels of three consecutive Marvel wins for the streaming service: Daredevil, Jessica Jones and Luke Cage.

Now that you’ve had a chance to watch (at least) one episode of the series, we have to ask: Do you think the series deserves the punishing reviews its getting?

In the series premiere, we meet Danny Rand (Game of Thrones‘ Finn Jones), who returns to New York City more than a decade after a plane crash killed his parents and, presumably, him. Upon visiting Rand Enterprises, the company that his family owned, Danny discovers the firm is now run by his childhood friends Joy (Jessica Stroup, 90210) and Ward Meachum (Tom Pelphrey, Banshee). 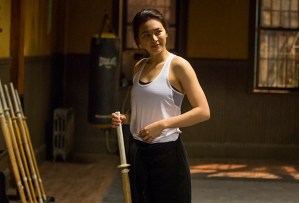 Suffice it to say, Joy and Ward are not just unhappy when Danny bursts into their office, asking to speak to their now-deceased father; they’re wholly skeptical, refusing to believe that this Danny is actually the one they used to hang out with as children.

And herein lies a key issue with Iron Fist‘s debut, which hasn’t gone unnoticed in reviews: In the span of an hour, nothing really… happens.

Yes, we get to know Danny, and we catch a few glimpses of the superhuman martial arts skills that he acquired post-plane crash. (And yet, compared to the electrifying fight scenes in Daredevil, or even Jessica Jones‘ physical badassery, Iron Fist‘s fight sequences feel strangely muted, considering that punching people is kinda his thing.)

Also revealed in Episode 1: (a) Joy and Ward’s manipulative father, Howard, is actually alive, and he’s unsure how to handle Danny’s sudden “resurrection”; (b) Danny can speak Mandarin and, as he informs acquaintance Big Al, he’s returned to New York seeking to “protect K’un-Lun from all oppression” and “honor the sacrifice of Shou-Lao the Undying”; and (c) Colleen Wing (Jessica Henwick, Game of Thrones), the dojo-running martial arts expert that Danny encounters in the park, is by far the most compelling character.

Ultimately, Iron Fist‘s first installment rolls the closing credits before we can ever become particularly invested in Danny’s life. Where his story should be enigmatic, it feels uncompelling. And while Netflix has occasionally struggled with the pacing of its Marvel series, the especially slow burn of Iron Fist‘s premiere hurts the series more than it helps.

But that’s just our take. Do you agree with Iron Fist‘s negative reviews — or do the critics have it wrong? Grade the series premiere in our poll below, then hit the comments to back up your choice.