What began as just another “Saturday” morning for the Workaholics (get high, watch cartoons, repeat) led to an unforgettable series finale adventure — which, let’s be real, they’ll all probably forget.

With but a small nugget to split betwixt them, Adam, Anders and Blake were forced to get creative, fashioning a glorious creation known as the Bermu-dope High-angle, a gadget that would optimize highness for all.

TV Stoners From The Simpsons, TVD and More 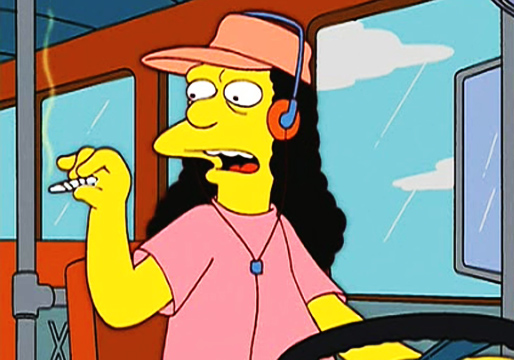 The guys were a little disappointed to then learn that it was actually Friday — Adam, naturally, was more upset about having to wait another day to watch PAW Patrol than he was about accidentally skipping work — but an impromptu rager eventually put him back in the right mood.

Impressed by the response to the guys’ party on social media, the marketing director of Bango energy drinks approached them the next morning, hoping to capitalize on “that tight butthole life” by sponsoring all future parties. (I know, I’m just as surprised as you are that the guys finally managed to throw a party people actually wanted to attend.)

As you’d expect, the instant fame that came along with being dubbed “Party Gawds” immediately spun out of control, especially when Bango decided to turn the guys’ parties into a web series; Adam became an entitled diva who paid someone to wipe his butt, Blake shaved his head to keep his “look” from being mass-produced, and Anders just sort of devolved into an all-around suicidal creep.

Fortunately, the Workaholics eventually came to their senses — following a few embarrassing post-Bango gigs (all of which included the smooth sounds of Asher Roth) and a dramatic confrontation in the TelAmeriCorp break room — and things went back to normal. Well, as normal as this show has ever been.

Tell us: Was this the perfect subtle send-off for the guys, or were you expecting… more? Grade the episode below, then drop a comment with your full review.