The unmasking of Prometheus, almost as if with the flick of a switch, got The CW’s Arrow back on track in a big way this Wednesday.

Wasting no time since we the audience became privy to who is beneath that gauzy mask, Arrow looped in Oliver by sending him to a heavily CGI’d monastery where Talia has erected a Mini Parbat. Confronted there by her onetime padawan, she cops to training Adrian Chase for his mission of vengeance, if only because Oliver felled her (admittedly estranged) father, Ra’s. Yes, I’m an al Ghul she reveals.

Alas for Oliver, but great in the name of dramatic tension, there is precious little he can do with that intel, as he quickly learns upon demanding face time with the D.A. after blinking himself back to Star City. After all, Adrian has Susan held hostage… somewhere. So to kill Adrian would be to kill Susan, and, as later reiterated later, and often, it would basically kill Oliver.

What follows is a game of… well, Oliver isn’t exactly sure, though he is repeatedly reminded, verbally, that he is 10 steps behind his cunning adversary. Literally everyone is fit to be tied, including Lance and Rene as they lock horns with Prometheus’ mild-mannered alter ego within City Hall. Even when Team Arrow get the location of Susan’s whereabouts (thanks to Felicity’s sketchy Helix hook-up), they are only met by bombs (for Dinah and Rene) and beatdowns. Oliver thinks he has an ace up his sleeve, when Diggle arrives with Adrian’s wife, who is aghast to learn of the hub’s extracurricular activities. But rather predictably — but still damn cold — Adrian guts Doris, lest she be used as leverage. As Dig runs the bleeding woman outside for help, Oliver gets into an extended fight with Adrian and eventually gains the upper hand… only to get taken down by an arrow from Talia al Ghul.

The episode closes with Oliver held captive in a cellar, shackled, as Talia gloats (throwing Oliver’s taunted about sure-to-be-disappointed fathers right back in his face) and Adrian reveals what game is at hand: Just as Oliver helped him discover who he truly is, Adrian will now do same for his adversary. Which is a bit psycho-babbly of a game for my liking, but let’s wait and see how it actually manifests itself. Maybe there’s a thimble token? 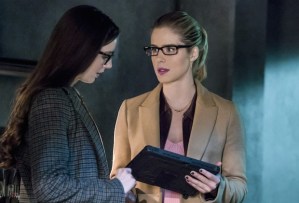 * As mentioned above, Felicity laid eyes upon Helix’s impressively appointed HQ — only to be told by Alena that there is a price for admission. So no, she can’t just use their gizmos for her pet projects; she needs to offer some pro quo for every quid. To that end, she helps them hack into a DHS drone, which raises all kinds of questions and eyebrows from Curtis. But for right now, whatever helps them find their latest missing friend, right?

* Felicity was able to deflect Oliver’s own concern about her welfare and the secrets she is keeping by producing Adrian’s real name: Simon Morrison. Oliver then tried to do an end run on Chase by tasking Pike with investigating the D.A.’s fraudlent identity, but that only got the captain stabbed into a coma. (Hope he doesn’t end up like this!)

* Surely met by cheers from some out there, Oliver at one point uttered, “I never should have gotten involved with Susan. I don’t know what I was thinking.”

* In flashbacks, Oliver introduced a skeptical Anatoly to his hooded, gravely voiced alter ego as they launched an assault on Gregor at his ice rink HQ. The caper mainly served to have Gregor echo Adrian Chase’s warning, that to kill him is for Oliver to kill himself.

What did you think of “Checkmate”?