If Suburgatory had followed lovable jock Ryan Shay into adulthood, he might have resembled Parker Young‘s comedic yet sincere character Richard on the Bravo series Imposters.

After all, former football player Rich has “a really good heart,” Young describes. “Sometimes, he speaks before he thinks. [He’s] a bit impulsive and definitely loves women. There’s definitely some Ryan Shay in there.”

But Ryan never had to deal with the kind of situation Richard finds himself in during this Tuesday’s episode (airing at 10/9c): confronting his estranged wife Maddie, who is actually a con artist responsible for stealing all his money — and his heart.

Below, Young previews how Richard and fellow duped spouses Ezra and Jules react to seeing Maddie again, as well as the “rabbit hole” of danger awaiting them. 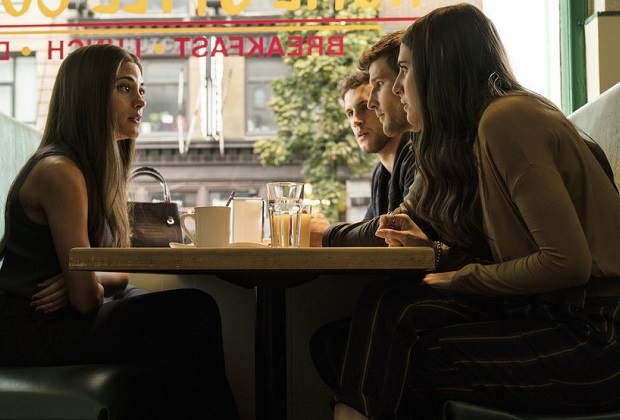 TVLINE | At the end of the last episode, Richard, Ezra and Jules finally came face-to-face with Maddie. What is that interaction going to look like?
Man, they didn’t really think this through. They set off on this journey in hopes of finding her, bringing closure to their lives and getting their money back. But they open a can of worms that they totally hadn’t planned for. All sorts of emotions are reintroduced that they have been suppressing or putting on the back-burner. Things start to heat up. She doesn’t just give them their money. [Richard doesn’t] just go on some much-needed honeymoon with her. Things are as complicated as ever. They’re forced to figure out what they do want now, and how hard they want to keep pursuing her and who gets her, if she wants to even be in a relationship with somebody again.

TVLINE | Does Richard still have feelings for her?
He absolutely does. He tries to pretend that he doesn’t, and that he’s after his money, but he loves this woman. She was his wife, and she completed him. She was absolutely his better half. He loves her, and he’d love to have her back, even though he won’t admit that to anybody, probably not even to himself. 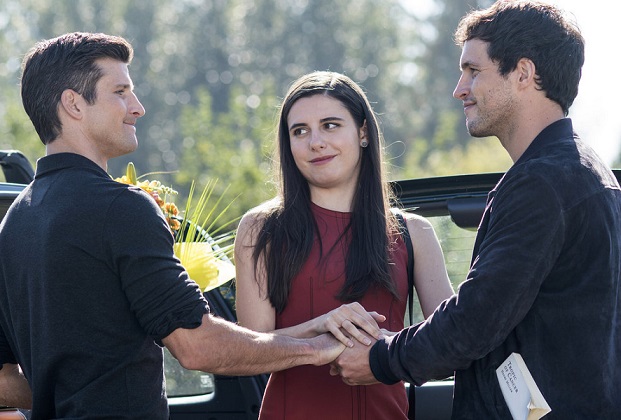 TVLINE | Richard, Ezra and Jules went through a similar experience with Maddie, but they have different memories of her. So when they have this confrontation with her, does it bring them closer together, or does it form a divide between the three of them?
Both. It makes them re-evaluate who they are to each other. There’s a little bit of a divide at first. They each think that they deserve her and that she loved [them] the most. But ultimately, the goal is for them to get past that and realize how ludicrous the idea is [of] getting back with this insane woman, this con who’s hurt them so badly. … Jules and Ezra understand what [Richard is] going through more than anybody, so they have that bond, which unites them.

TVLINE | There’s a bigger operation at play here with Maddie working for The Doctor, and now her new mark has been murdered. When the three of them come into this world, how does that affect them?
It’s scary. They’re in way over their heads. Up to this point, they think that they’ve got it kind of figured out… But the rabbit hole goes much deeper than they realize. Actually, in this upcoming episode, Richard discovers something very shocking about somebody.

TVLINE | Richard has picked up little tricks here and there to make money. Is he on his way to becoming a full-fledged con artist?
He’s enjoying this journey a lot and loving the idea of not having to live life by certain rules. There’s a thrill that comes with conning that is not dissimilar from the thrill of playing football, which was a big part of his life growing up. The problem is he has such a good heart. He doesn’t like to hurt people. He has such a strong moral compass. So that’s the most difficult part of all this: He wants to make sure they’re not screwing over good people. Ultimately, to be a con artist, you’ve got to put your emotions aside, and you’ve got to con whoever needs to be conned. So that will be his biggest obstacle. But also, because they find themselves so deep in this rabbit hole that they discover in this next episode, he may not have a choice.