As The Voice neared the swan song of its Season 12 Blind Auditions Monday, we were treated to a bevy of contenders covering everyone from Justin Bieber to Johnny Cash. But were any of the vocalists the kinds of talents whose hits future wannabes would cover during their Blind Auditions? Read on for my randomly-ordered reviews of the nine performers (whose full auditions were shown) advancing to the Battle Rounds, then hit the comments to critique and grade them yourself.

Kenny P (Team Gwen), “Hello It’s Me” — Grade: C+ | As quirky as the charming tiny-house-dweller from Cleveland came off in his introductory video — the hipster mustache alone… I mean, come on — his rendition of the Todd Rundgren gem was about as straightforward as it gets. Pleasant, yes. Absolutely. But not really the kind of earth-shaking audition that makes you (or at least me) go, “Holy crap! A star is born!”

Valerie Ponzio (Team Blake), “Ring of Fire” — Grade: B- | After a first verse that sounded a little affected and unsure, this 32-year-old Texan (Johnny) Cashed in on her potential with a soaring second chorus that showed us how intoxicating her honeyed-whiskey voice could really be. Now would somebody please — no, seriously, I’m begging — tell me whose vocals hers so reminded me of? It’s going to drive me crazy until I figure it out. Natalie Merchant maybe? 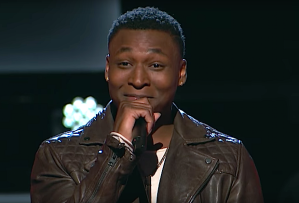 RJ Collins (Team Alicia), “Purpose” — Grade: B- | Motivated to pursue music by the death of his encouraging older brother, this 18-year-old Chicagoan made a Belieber of Adam within his first handful of notes, with Alicia following shortly thereafter. But as sweet as his vocals were — and as sweet as he seemed — it didn’t really scream “special” or “unique,” did it?

TSoul (Team Blake), “Take Me to the River” — Grade: B+ | After hearing this 29-year-old Virginian’s impassioned take on the Talking Heads, I understood immediately why his viral videos have amassed him an army of TSouldiers — and why Blake called him “one of a kind.” Great voice, memorable style, potential galore.

Hanna Eyre (Team Adam), “Blank Space” — Grade: B | This sunny 15-year-old California girl started off singing Taylor Swift clear as a bell, faltered (maybe when Adam turned his chair?), then not only regained her composure, she gained momentum as she went on. An impressive feat, especially for one so young. But that exuberant inexperience could also be her undoing in the long run, no? 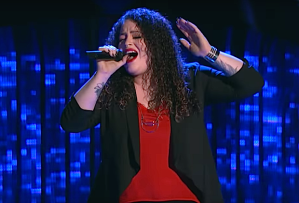 Enid Ortiz (Team Blake), “All I Ask” — Grade: B- | I suspected the hints of theatricality in the powerhouse’s voice — husky and huge as it is — were going to repel the coaches. They don’t generally seem to like anything Broadway-y, right? But, at the last second, Blake sneakily swiveled his chair, giving her take on Adele the thumbs-up.

Nala Price (Team Adam), “Send My Love (to Your New Lover)” — Grade: B+ | When this small-town Florida teen went big with her vocal, it seemed to get a little out-of-control (although Adam was impressed by the way she maintained her composure). Still, there was no denying that she had a strong voice and lots of potential.

Sammie Zonana (Team Gwen), “Dangerous Woman” — Grade: A | When you look at this Austin wedding singer, you think “adorable.” (I did, anyway — she reminded me somehow of Alia Shawkat.) But when you listen to her, you think, “Whoa — there’s enough sexy smoke in her voice to fill a bar back before smoking in bars was banned.”

We were also informed — without seeing the full auditions (gyp!) — that Blake had recruited Andrea Thomas (“Baby Now That I’ve Found You”) and Gwen had rounded up Davina Leone (“Cheap Thrills”) for their teams.

So, what did you think of tonight’s singers (at least the ones whose auditions we were shown)? Rank them below from least-impressive to most-, and, if you’re so inclined, assign a letter grade while you’re at it.