In Sunday’s FEUD: Bette and Joan, Davis and Crawford did the unthinkable and called a truce. The end.

No, obviously, that wasn’t the end. In fact, the cease-fire only lasted about as long as it took either actress to finish off a vodka rocks. What brought the curtain down on the Baby Jane co-stars’ detente? Read on…

‘PACK THE BAGS OF THE GIRL NEXT DOOR’ | As “The Other Woman” began, Joan noticed that the ingenue who’d been cast as the Hudson sisters’ neighbor was turning heads on the set. As if that alone didn’t doom the starlet, she told Crawford that her grandma had been a big fan. When Bob refused to can the young bombshell, Joan suggested to Bette that the girl might “pull focus” — especially once their womanizing director started sleeping with her. Next thing we knew, Bette was siding with Joan, barking at Bob that he was “casting with the wrong head” and threatening to call in sick until the kid was pink-slipped. Clearly, the rivals could have been — and for that one shining moment were — a formidable tag team.

Alas, it seemed that Hollywood remained as determined as ever to cast the twosome as enemies. In the ’40s, Jack had signed Joan to Warner just to send Bette a message: “You’re not the only bitch in the kennel.” And, during the shooting of Baby Jane, he informed Bob that he was so pleased with the dailies that he was going to open the picture wide… that is, if its director would generate buzz by keeping its leading ladies at one another’s throats. On one hand, Bob didn’t want to. On the other, it would break up what he likened to the “Hitler/Stalin pact” that was making life hell for him on the set. Hearing this, wife Harriet pointed out that there were rumors that he was cheating on her. Not true, he proclaimed. “But,” she replied pointedly, “it hurts just the same” — something that he should consider before spreading gossip himself! 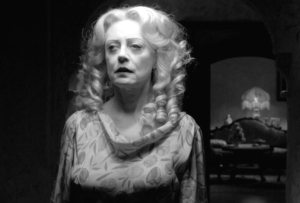 ‘I HOPE DIGNITY PAYS YOUR GAS BILL’ | Over lunch with Hedda, who was hoping for “red meat, not pabulum,” Bob refused to dish on his stars, prompting the gossipmonger to scoff that he was no John Ford, for that director had known how to play the game. Finally, Bob caved, nauseating himself by offering up a blind item about how distracting Bette found Joan’s falsies. As soon as Crawford read the column, she, of course, saw red and, regrettably, played right into her director’s hands, allowing him to sell her on the idea that “I am the only opinion that matters.” Moreover, Joan then rang up Hedda’s rival Louella Parsons to give her an on-the-record rebuttal, in which she said — and asked to be quoted as saying — “Miss Davis looks old enough to be my mother.”

Right on cue, Bette hit the roof and threatened Joan that she’d “steal this picture right out from under [her] nose.” Delighted by the “pure, naked rancor” he was seeing on screen, Jack wanted more — and he wanted Bob to get it by making each star think he liked the other better. Tragically, that was a piece of cake. Bette was already insecure about her performance and wondered if it really was brave or merely her attempt to bury her nemesis. “I don’t want to end up a joke,” she told Bob, who reassured her during a rather intimate “I’ve Written a Letter to Daddy” run-through that he wouldn’t let that happen. In response to talk of Bette’s private rehearsals with Bob, Joan tearfully phoned him in the middle of the night to say that she wanted to quit Baby Jane because loverboy Peter had left her over it. When Bob arrived at Chez Crawford, Joan — with whom the cad had had a fling during the making of Autumn Leaves — tried to no avail to rekindle that old flame. Worse, Peter walked in, inadvertently exposing her lie about their breakup (which she then made truth by kicking him to the curb). 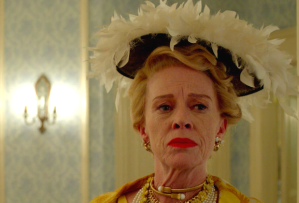 ‘ANYTHING TO GET AWAY FROM YOU AND YOUR SADNESS’ | Later, when Hedda showed up at Joan’s ticked that she’d given the rival columnist an exclusive, Crawford said that she’d only done so to get her gal pal’s attention. Truth was, Joan confided off the record, she was $2 million in debt, thanks to her late husband, and desperately needed to work for a few more years to get her kids through school. Not to worry, Hedda said. Another Oscar ought to buy her that time — and, since Hedda’s was the only opinion that mattered, she should be able to get one for her friend.

Meanwhile, on the set, Bette met her Baby Jane leading man Victor Buono (Dominic Burgess), who rightly guessed that she’d expected someone “thinner, less homosexual,” and pitched a fit when B.D. attracted the attention of all the grips. When Bette, in a huff, told her daughter she was sending her to Maine for the rest of the summer, B.D. accused her not only of being jealous but of having not gracefully stepped aside like other actresses when her turn on the carousel was over. Distraught, Bette called Bob, who, upon arriving at her doorstep, couldn’t imagine what she needed that couldn’t wait till morning. “A friend,” replied a tearful Bette. Not that Bob was much of a friend. He took advantage of her vulnerability, kissing her as we faded to black, then climbed into bed with Harriet just in time to get up for work the following morning.

So, what did you think of “The Other Woman”? Hit the comments.