ABC introduced us to yet another American Crime on Sunday night, as the anthology drama returned with its third season. Having previously tackled such issues as rape culture, racial prejudice in the justice system and homophobia, series creator John Ridley is putting a spotlight on other timely subjects in Season 3: immigration, sex trafficking and drug addiction, among others.

Much as American Crime‘s sophomore run began with a harrowing 911 call, Sunday’s season premiere kicks off the same way — except, instead of reporting a rape, the Spanish-speaking caller is alerting authorities to a dead body floating in the river. We don’t learn much else about that potential murder during the rest of the episode, or how it affects the season’s major players, but it quickly becomes clear that it’s not the only injustice going on in North Carolina, the setting for Season 3.

* Kimara Walters (played by Emmy-winning series vet Regina King), a social worker who primarily deals with teen victims of the sex trade. Kimara has burdens of her own; she can’t afford to pay her cable bill, and her in vitro fertilization treatments aren’t taking. But Kimara’s top priority is clearly her work, even when her clients don’t want her help — as is the case with Ishmael, a young man who, despite being forced into prostitution, refuses to sell out his pimp and rejects Kimara’s attempts to find him a shelter for the night.

Later, we meet Shae, another teenage sex trafficking victim who seemingly works for the same skeezy boss as Ishmael. When Shae winds up at a sketchy motel room at the end of the episode, forced to engage with a creepy, handsy client, she seems equal parts relieved and terrified when the cops bust in, arrest the man and introduce Kimara as Shae’s new social worker. 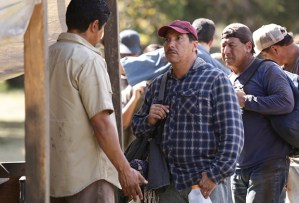 * Laurie Ann Hesby (24‘s Cherry Jones), who, along with her two brothers, now runs the Hesby Farms enterprise that their father previously maintained. Much to Laurie Ann’s chagrin, Hesby Farms is struggling to compete with other produce providers that have significantly lower labor costs. The solution? Farm chiefs, like the one played by Crime staple Richard Cabral, must go out and recruit extra-cheap workers (see: undocumented immigrants) in order for the Hesby business to stay afloat.

Luis Salazar (Benito Martinez) is one such immigrant, who takes up farm work upon arriving in North Carolina. But whatever vision Luis had of life in America is quickly tarnished; when he gets to the South to begin his job, Luis finds that immigrants are essentially modern slaves, forced to live in rundown trailer parks and constantly indebted to their employers.

* Though we don’t see much of them in the premiere, Felicity Huffman and Connor Jessup (who have both starred in previous seasons) also appear: Huffman plays Jeannette, the well-meaning wife of a farm-owning Hesby brother, who desperately wants to help her financially unstable sister; Jessup, nearly unrecognizable from his Season 2 run, plays Coy, a young drug addict who gets recruited by Cabral’s Isaac to work on the Hesby farm.

Ridley and his American Crime production team use many of the same elements in Season 3 that they have in years past — evocative violin music, extreme close-ups, seemingly disparate storylines that end up weaving together in rather heartbreaking ways.

Although Sunday’s premiere takes its time introducing us to the season’s main characters and their struggles, it once again tees up a run of episodes that will likely take a cold, hard look at societal issues going undiscussed.

That’s our take, but what did you think? Grade the premiere in our poll below, then hit the comments to back up your choice.