You may have already seen that Kimmy Schmidt Season 3 teaser where Titus smashes up a car window with a baseball bat, Beyoncé-style… but that’s not the only thing getting broken this season.

“I was nicknaming Season 3 ‘Love, Loss and Lemonade,'” Jane Krakowski (Jacqueline) tells TVLine. “There’s a lot of love and heartbreak and moving on and growth.”

Aside from that Lemonade-inspired teaser, we still haven’t seen any footage yet from the third season of the Netflix comedy, debuting Friday, May 19. So we had to catch up with Krakowski, Tituss Burgess (Titus) and Carol Kane (Lillian) at a recent press luncheon to dig around for some scoop — and we hit paydirt.

Read on for five juicy hints about what’s to come for Kimmy and company in Season 3. (Warning: minor — but devastating — spoilers ahead.)

1. Titus gets his heart broken.

Yes, we’re sorry to break the bad news, but: Titus’ whirlwind romance with construction worker Mikey (Mike Carlsen) comes to an abrupt end this season. Burgess says their relationship is “very much on the rocks” in Season 3: “[Titus] gets off the boat… sooner than expected. Nothing can go right in Titus’ world. And he doesn’t want to see Mikey until he gets a job. So he finally gets up the nerve to surprise Mikey… and it doesn’t go so well. He sees something that he doesn’t want to see. And subsequently, he starts Lemonade-ing.”

That Lemonade tribute is actually a plot point in Season 3, Burgess says, and an honest portrayal of Titus’ post-breakup grieving process: “We’re taking it seriously, even though it’s silly. It’s how he deals with the betrayal.”

We don’t want to destroy your faith in romance completely, but Lillian and her sweet boyfriend/accused murderer Robert Durst (guest star Fred Armisen) call it quits this season, too. “Sadly, we do break up,” Kane hints. “But then I have another boyfriend! But I’m not allowed to say who it is.” (Robert Blake’s not single, is he?) 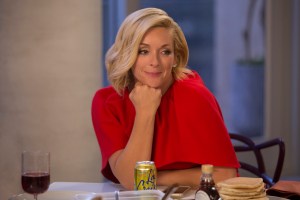 3. But Jacqueline and Russ are still together!

One out of three ain’t bad: Krakowski confirms that Jacqueline’s unlikely romance with Russ (David Cross) is still going strong in Season 3, with the two battling Russ’ family to change the name of the NFL team they own, the Washington Redskins. But she concedes Jacqueline isn’t completely enlightened yet: “At the start of the season, Russ is in Africa, trying to fight rhino poaching. And Jacqueline doesn’t understand why people care how rhinos are cooked.”

Along with Lillian’s mystery beau, we’re hoping to see more of Mad Men‘s Jon Hamm in Season 3 as the Reverend Richard Wayne Gary Wayne, since last season ended with him asking Kimmy for a divorce. The cast is tight-lipped about naming any A-list names, but Krakowski hints that we’ll definitely recognize some familiar faces: “This year felt a little bit like the height of 30 Rock, when people were asking to come on to do little stints.”

5. Lillian is an elected official?!

Isn’t it amazing who’s winning elections these days? Lillian indeed runs for office this season, Kane says, adding with a smile: “I have a little power.” It’s all part of her ongoing anti-hipster crusade: “I don’t want the hipsters to take over the neighborhood. I want my little gangs, the Banana Boys, to keep their turf. Plus, all my drug people! I’ve got to be able to buy from the stoop! So convenient.”