We were promised that the Mikaelson family would have a “presence” in The Vampire Diaries series finale… but no one said anything about presents!

Of all the gasp-worthy moments from Friday’s send-off, Klaus’ letter to Caroline — which you can read in full in my recap of the episode — easily elicited the biggest gasp from me. (If you’re a regular TVLine reader, you know I’m a recent convert to the concept of Klaus and Caroline’s romance.) 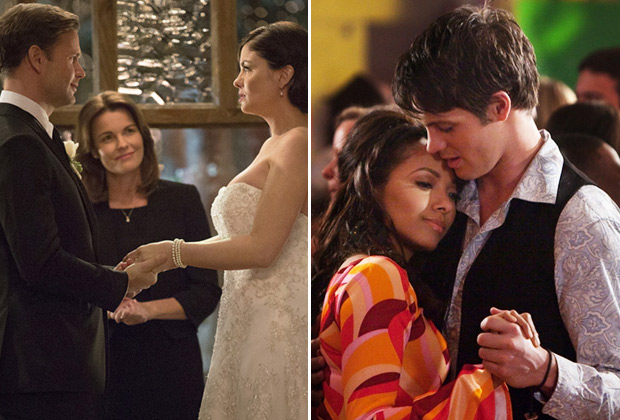 Below, executive producer Julie Plec discusses the big “Klaroline” moment, including TVD‘s future connection to The Originals and the Joseph Morgan appearance we (sadly) had to do without:

TVLINE | I have to know… What did Alaric mean when he said this was the beginning of another story?
It means a couple things to me, none of which are tangible yet. It’s a wish, not a promise, but I do think there are more stories to be told. I think The Originals has the opportunity to visit with some of these characters, and I think there are future shows down the line that can be spawned out of this world and could tell good stories. It’s a hope for the future if nothing else.

TVLINE | Speaking of which, we know Alaric is crossing over for an episode. Where will that fall, time-wise?
That falls probably more in line with the timeline of that last scene with the letter. In fact, Alaric is the one who shows up and actually tells Klaus about the school. The idea of the school as a safe haven for young supernatural beings certainly has a lot of relevance for Hope Mikaelson.

TVLINE | When Alaric first brought up the idea of opening a supernatural school, I was like, “I want this spinoff.”
[Laughs] Good. I do, too.

TVLINE | Had scheduling not been an issue, and you did have Joseph Morgan for this, what would that scene have looked like?
It would have been just an incredibly simple scene with Caroline at her desk, running her new school. There’d be a knock on the door from a new donor. She opens the door, it’s Klaus Mikaelson. And he would have said, “Hello, love” or “Hello, Caroline,” and that would have been it.

TVLINE | Caroline and Bonnie are some of the few characters we didn’t see at “peace.” Is it safe to assume she made it there eventually?
Yes. For us, two things were very important: that Bonnie got to live a long and happy life, and that Caroline lived on and carried on the legacy of all the good things she wanted to do. The one person who was so good at being a vampire is now helping other people with their supernatural problems. So Caroline will probably be alive and kicking for centuries, in my opinion.

How did you feel about the series finale’s “Klaroline” moment? How are you hoping this story might continue someday? Grade the episode below, then drop a comment with your thoughts.