The treasured sight of Dean and Sam in glasses couldn’t quite rescue Thursday’s Supernatural, which felt a little too familiar, what with yet another power play for Hell and one of the Winchesters lying to the other. Sam tells Dean that he’s been using an algorithm to find their recent plethora of cases — “Computers,” Dean marvels — when he’s actually been getting leads from the British Men of Letters. To Sam’s credit, he confesses the truth by the end of the episode.

“I don’t like them either, but if we can save people…” he trails off before apologizing for the lies.

Surprisingly, Dean accepts the truth with very little anger. “Do I like it? No. Do I trust them? Hell no,” he responds. “But you’re right. We work with people we don’t trust all the time,” like Crowley, who this week partnered up with the bespectacled brothers to put down a hellhound. (They needed the glasses to see the beast.) Dean agrees to give the Brits a shot, but the second things start to feel a little off, they’re out.

Down in Hell, Lucifer is mighty defiant for someone who’s chained up. “I’m still going to peel off your skin and eat your soul,” he says to Crowley. 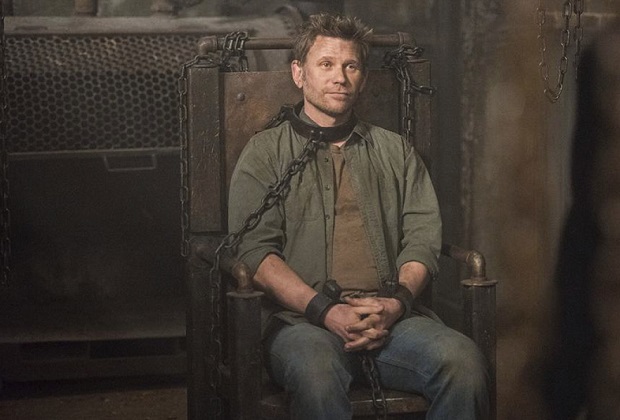 While the King’s away helping the Winchesters, two of his minions discover the fallen angel’s hiding spot, much to their delight. Many of them don’t like Crowley because “he’s very prancy,” they explain. So they released the hellhound to create a distraction and free Lucifer — but they have some demands first. Or at least one of the minions does. The other only cares about “making Hell great again.” Alas, Lucifer makes them both go poof, and then takes his spot on Crowley’s throne. Little does he know that Crowley warded his vessel with spellwork.

“I own you,” Crowley declares, snapping Lucifer’s bones like twigs.

Up in Heaven, things are on the mend. Lucifer’s spawn has united the angels, who even extend an invite to Cas to come back. All he needs to do is help them track down the baby mama, Kelly. Joshua’s back in the fold, and he has a plan, his messenger reveals. So after giving Dean and Sam the latest intel on Kelly and her Prince of Hell defender, Cas heads back upstairs.

What did you think of “Somewhere Between Heaven and Hell”?