From almost the very first time TV’s new MacGyver whipped out his Swiss Army knife, a plan was afoot to eventually cross over the freshman CBS drama with its lead-out, Hawaii Five-0 — as will happen this Friday at 8/7c.

“There is a detail in the [MacGyver] pilot that, if you look closely — I cut out the part that actually was a little more obvious — on Jack’s gun in the flashback to Iraq, it said, ‘Aloha’ on the barrel,” Peter M. Lenkov, who serves as showrunner on both series, tells TVLine. “That was because Jack (played by George Eads) had actually met McGarrett while in the service, and that was a nod towards that friendship.” 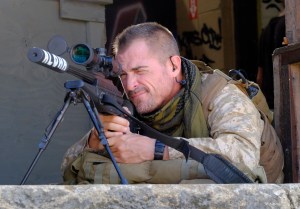 MacGyver viewers never got a good look at Jack’s rifle barrel, but the ‘Aloha’ nod to Five-0‘s McGarrett was there.

Another nod came during MacGyver‘s Zodiac Killer-themed episode (in which Jack refers to a having an old buddy in Hawaii), while Five-0‘s Chin Ho recently name-checked the Phoenix Foundation, for which Mac, Jack et al execute covert ops.

“We’ve been playing around with the fact that the universes are the same,” Lenkov notes. “Because the [shows’] ingredients were similar, I always knew that they would somehow have some kind of fusion at some point.”

Setting the stage for Friday’s “fusion,” Lucas Till’s MacGyver and his team are on the way back from a mission, flying over the Pacific, when they get wind of and decide to help with an earthquake relief effort in Hawaii. There, they work with Five-0‘s Chin and Kono (Daniel Dae Kim and Grace Park) to rescue a group of trapped government scientists — all while some nefarious types plot to steal the top-secret weaponry from the compromised lab.

As the two pairs get to collaborating, Chin and Kono “are a little skeptical of MacGyver, with the nontraditional ways he’s going about the rescue effort. But I think he wins them over after a while,” Lenkov previews. “That even carries over to [Friday’s] Hawaii Five-0, where they talk about meeting this guy MacGyver who was pretty impressive.”

With Five-0 scheduling issues informing who would and would not get to participate in this first crossover, Lenkov expects that there will be more chances to actually reunite Jack and Alex O’Loughlin’s Steve McGarrett, and maybe get insight into their introduction. “Oh yeah, for sure. The plan is hopefully this is one of a few that we’ll do,” he says.

But when presented with the prospect of one day mining the full, shared CBS drama universe — Hawaii Five-0, after all, crossed over with NCIS: Los Angeles in May 2012, and NCIS‘ Hetty once appeared on Scorpion — Lenkov at first lets out a laugh. MacGyver to Five-0 to NCIS: LA to Scorpion to NCIS to NCIS: New Orleans! And then starts his wheels turning….

After all, during his time as a CSI: NY executive producer, he reminds, “We did a three-way crossover between all of the CSIs, and that was one of my favorite experiences, to see these iconic characters working together. So yeah, that would be supercool.”