By the time we got to the end of Part 2 of Week 2 of The Voice’s Blind Auditions, we’d been treated to a raspy-voiced Rod Stewart wannabe, an impromptu Alicia Keys cover of “Girls Just Want to Have Fun” and a great deal of talk about Blake Shelton’s desire to live the girl dream that Gwen Stefani had. How were the actual performances, though? See below for my (randomly ordered) reviews and letter grades of the singers moving on to the Battle Rounds, then hit the comments with your own critiques.

Johnny Gates (Team Gwen), “Maggie May” — Grade: B | This 31-year-old’s cover of Rod (for whom his band once opened) was deffo better than average, and right in his sweet spot vocally. But what really elevated his performance was the energy that kept him bopping around the stage for the duration of the number. Made him not only someone you’d like to listen to but watch as well.

Lauryn Judd (Team Alicia), “Girls Just Want to Have Fun” — Grade: B+ | This bubbly 16-year-old — a real-life Sue Heck, no? — charmed with her folky take on Cyndi Lauper but wowed with her range (which was so great, it made her coach think for a moment that there were two singers on stage, not one). 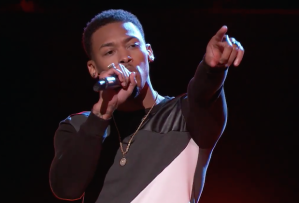 Malik Davage (Team Adam), “Sure Thing” — Grade: C | Though this 23-year-old was so devoted to his baby daughter that he broke down just thinking about her, his Miguel cover was at best competent. Even his coach, after a group hug with the handsome singer and Gwen Stefani, had to admit that his vocals needed work. Maybe if he could pour more of that emotion into his performance next time?

Caroline Sky (Team Gwen), “Will You Love Me Tomorrow?” — Grade: C+ | Not sure what Gwen heard in the shaky start to this elegant 16-year-old’s rendition of the Carole King classic to make her swivel her chair so quickly. Caroline didn’t really come alive until the chorus, and even then, she was only some of that, not, you know, all that.

Josh Hoyer (Team Blake), “Oh Girl” — Grade: B+ | This 40-year-old father of two from Lincoln, Neb., sang the Chi-Lites hit like a man on a mission, which he accomplished by turning both Blake Shelton’s and Gwen’s chairs. But, as good as his performance was, was it special? I didn’t think so. (Am I jaded after only two weeks?)

So, what did you think of Tuesday’s contenders? Rank them below in order from least- to most-impressive and, should the spirit move you, grade ’em as well.