From the Ways You Can Tell They’re Getting Serious on The Voice file: Monday’s Blind Auditions found Blake Shelton relying on his dimples to curry favor with not only a contestant but a contestant’s mother, Blake and Adam Levine trying to rattle the un-rattleable Alicia Keys with smack talk, and Gwen Stefani stalking young-girl singers for her roster. But did the coaches recruit any truly noteworthy contestants? Read on below for my (randomly ordered) reviews of the nine singers advancing to the Battle Rounds, then hit the comments with your own critiques.

Kawan DeBose (Team Adam), “Let’s Get It On” — Grade: A- | OK, so the 30-year-old Floridian held onto that last long note by his fingernails, he still hit a high in there that many a singer would need a stepladder to reach. Adam even likened it to Prince’s falsetto. Also working in Kawan’s favor: He seemed to have not only the personality but the confidence of any three contestants combined. 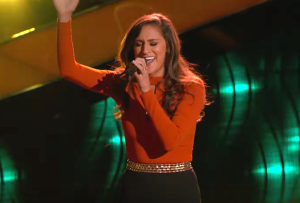 Micah Tryba (Team Blake), “I’m Every Woman” — Grade: B- | The would-be veterinarian had the guts to tackle the Whitney Houston classic, but, after she started strong, I wasn’t really sure she had the pipes. (Even Adam noted that she had a coupla “issues.”) Furthermore, as Gwen gently suggested, Micah, sweet as she was, didn’t exactly overwhelm with personality on stage.

Jack Cassidy (Team Alicia), “One of Us” — Grade: C | Accompanied only by his own piano-playing, the 18-year-old nephew of David and Shaun Cassidy (and grandson of Shirley Jones) ably demonstrated that he had one of the night’s more distinctive voices. But neither did he seem to have a ton of control over it, nor was it always really entirely, er, pleasant. (I’d have swiveled for Ericka Corban instead.)

Taylor Alexander (Team Adam), “Believe” — Grade: A- | It might have been good enough to get a chair swiveling that the 25-year-old Georgian had a fine voice, which he did. But what really sold him was his bold and brilliant decision to cover Cher’s hit country style, which he also did. First performance I’ve heard this season that I’ll be buying off iTunes. 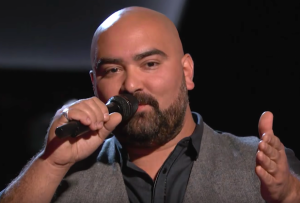 Troy Ramey (Team Gwen), “Wild World” — Grade: C+ | Bringing to mind a gentler Joe Cocker, the 32-year-old got all four chairs swiveling with his Cat Stevens tribute to his late father. Alicia heard “lifetimes in [his] voice.” For me, it was a little monotone. Pleasant but not exceptional. (Then again, as the season progresses, I might just be grading harder.)

Gaby Borromeo (Team Adam), “Happy” — Grade: B- | After a shaky start — which Adam nailed as nerves — the purple-haired New Yorker hit her stride and turned her Leona Lewis cover around. But although the young old pro, once almost “discovered” by John Legend, ended on a high note, would you really remember her an hour later, much less when we get to the Battle Rounds?

Missy Robertson (Team Alicia), “Scars to Your Beautiful” — Grade: C | The 34-year-old from Sacramento didn’t get any chair turns till the very last second. And, as interesting as her voice was — and as full of potential as it was — I kinda understood that. She didn’t seem to have a handle on how to control her powerful pipes.

Aaliyah Rose (Team Gwen), “Rise Up” — Grade: C+ | After getting a video shout-out from Meghan Trainor (whom she’d covered online), the 14-year-old YouTube star dazzled Gwen… but only Gwen. And sure, the kid’s voice has oomph. But her jitters — even her coach noticed that she got spooked the minute that chair swiveled — seem likely to be her undoing. 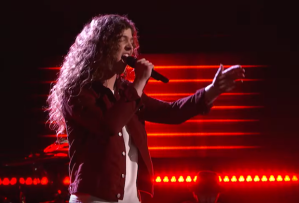 Josh West (Team Adam), “Ordinary World” — Grade: C | Despite the theatricality of his Duran Duran cover — and his lack of control over his big voice — the 17-year-old, playing for the first time without his bandmate/dad, managed to pull off a four-chair turn. Maybe the coaches were responding to his passion — the well-tressed youth’s vocals certainly had that in spades.

What did you think of Monday’s singers? Rank them below from least- to most-impressive and, if you’re so inclined, assign a letter grade to each while you’re at it.