At the close of the March 5 episode, Hetty went to the hospital to check in on her longtime friend and colleague, who during the mole hunt storyline was brutally stabbed. Except, there was no Owen to be found.

“I’m afraid he’s gone,” a nurse told Hetty — though not gone gone. Rather, it is explained, “One minute he was here, and the next minute he wasn’t…. He pulled out his IV and walked out.”

But not before leaving something behind for Henrietta — a note, explaining, “I have some unfinished business to take care of,” and he will leave it up to the team leader to account for his vanishing. “I’m sure you’ll think of something,” he wrote. “You always do.”

As a version of the Bob Dylan classic “Knockin’ on Heaven’s Door,” sung by Ferrer and performed by his blues-rock band, the Jenerators, played, Hetty retreated to the elevator with a look that indicated her pride at her pal’s deft disappearing act.

The screen then faded to black, with the above memorial card to the dearly departed co-star.

What do you think about how NCIS: LA wrote out Granger? 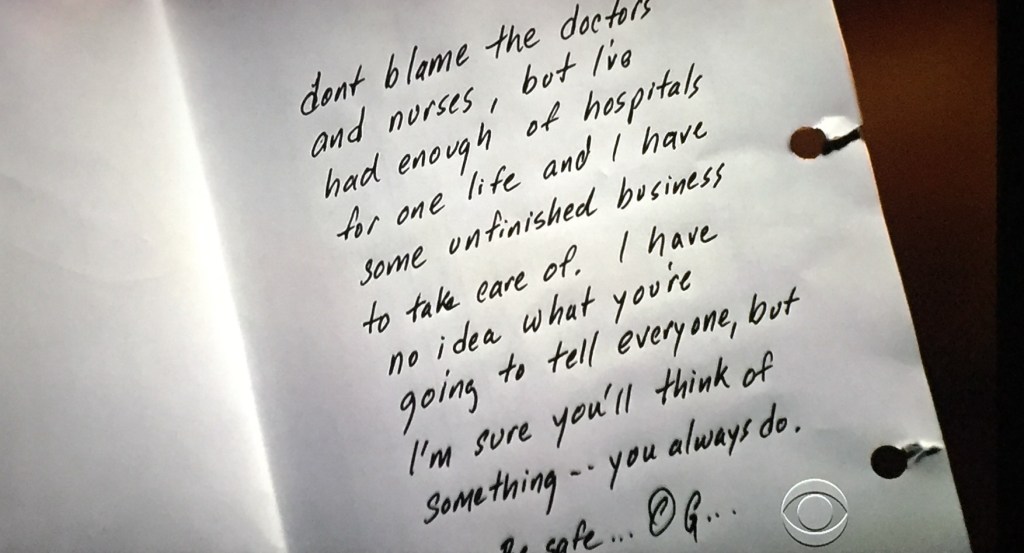