Fox’s time-travel comedy Making History hops across centuries to show us the highlights of American history, but a word of warning: If you actually learn anything, that’s purely by accident.

Sunday’s series premiere introduces us to Dan (Adam Pally), a lazy goofball who works in maintenance at a Boston-area college. He has a secret life, though: Using a duffel bag he found among his dead father’s belongings, he’s able to time-travel to any era he chooses. He keeps going back to Lexington around the time of the American Revolution, because he’s found a sweet girl there named Deborah (Leighton Meester) he’s able to impress with Celine Dion lyrics.

When he returns to present-day, though, Dan worries he messed up the timeline of history. (Starbucks shouldn’t sell tea!) So he enlists history professor Chris (Yassir Lester) to go back with him and repair the damage he’s done. Chris is wary at first — “You have urgent questions about colonial Massachusetts?” — but he’s excited to meet his historical heroes in the flesh. Dan makes sure to pack some ham for the trip: “In the 1700s, ham is pretty much like diamond-covered heroin.” 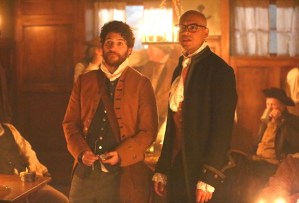 Back in colonial times, Chris tries to start a revolution by railing against “taxation without representation” at a local tavern. But the patrons don’t really warm to him until he starts quoting Cuba Gooding Jr. in Jerry Maguire: “Show me the money!” Dan introduces Chris to his pals John Hancock (John Gemberling) and Sam Adams (Neil Casey), and Chris is thrilled to try Sam’s latest beer — until Adams reveals they just pranked him into drinking out of the chamber pot. (Who knew our Founding Fathers were such frat boys?)

To get the revolution started, Dan and Chris seek out blacksmith Paul Revere (Brett Gelman). But he’s too upset to warn anyone that the British are coming: His daughter is breaking her engagement to run around with some fool. And yep, you guessed it: His daughter is Deborah. Paul vows that he’ll find and kill Deborah’s mystery suitor — with a special tool he just forged! That’s Dan’s cue to escape back to the present.

Before he leaves, he confesses to Deborah that he’s from the future — and she wants to go back with him. (She thinks women are treated with respect in the 21st century, poor girl.) But Chris wants to stay back and make sure the American Revolution happens. So Dan and Deborah zap back to the present, and notice a new statue in the college quad: It’s of Chris, calling him a Revolutionary War hero, and saying he died… the day after they left him. Cliffhanger!

How’d you like the Making History premiere? Give it a grade in our poll, then drop your more extensive thoughts in a comment below.