Autumn Reeser has negotiated a Hollywood agreement before on Entourage. But her new series The Arrangement is about a different kind of La La Land deal-making: contract marriage.

In the E! drama (premiering this Sunday at 10/9c), unknown actress Megan (The Walking Dead‘s Christine Evangelista) is offered $10 million by megastar Kyle (Dallas‘ Josh Henderson) to be his wife. Alias vet Michael Vartan costars as Kyle’s friend/mentor Terence, who heads the self-help organization The Institute for the Higher Mind.

The group may share a likeness with Scientology, but “there are elements of a lot of different philosophies [and] religions that are reflected in this institution,” says Reeser, who plays Megan’s aggressive and very pregnant agent Leslie. It’s a role the actress is familiar with, having gone toe-to-toe with Entourage‘s Ari Gold. 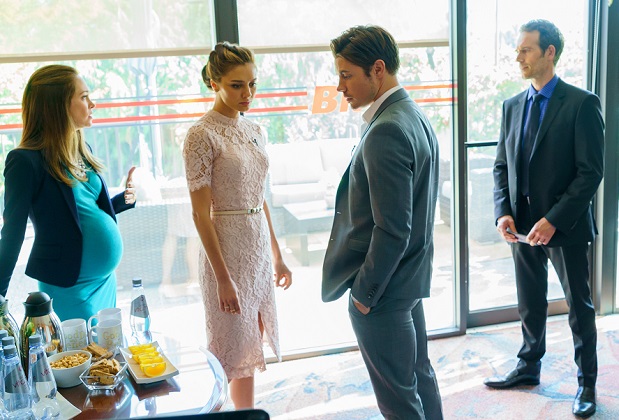 Much like her agent character on the HBO comedy, Leslie is “great at her job,” Reeser describes. “She’s very clear about her opinions, and she’s not afraid to share them. She’s not afraid of conflict. She goes after what she wants — a nasty woman. I feel like she’s very modern and very now.”

But the similarities between the two shows end there. “This is much more of an exploration of the relationship side of Hollywood,” Reeser says. “How do you sustain a relationship, and how much of them are real at this high level? It’s not like an A-list star can just go on Tinder to find a date.”

Hence the unconventional proposal presented to her client, which Leslie believes “is what’s going to be best for Megan’s career,” Reeser shares. “She has to deal with the repercussions of that on a deeper, personal level later, because of course it ends up not all going according to plan.” For now, however, Leslie is “looking after Megan’s best interests as an actress. She’s not Megan’s mother. She’s Megan’s agent,” Reeser notes.

That position puts her up against the controlling Terence, whose self-help org is “just this pesky little fly” to Leslie.