Life isn’t quite like a box of chocolates for Jeff Sessions, but that didn’t stop Saturday Night Live from having the Attorney General double as Forrest Gump in this weekend’s cold open.

Kate McKinnon’s Sessions sat at a bus stop, telling various commuters about his terrible, horrible, no good, very bad week, which found him forced to address allegations that he, along with several other top advisers to Donald Trump’s presidential campaign, were in contact with Russian officials.

“I had a bad week,” Sessions said. “It started out real good. The president made a great speech; folks were thrilled on account of it was real words in a row for a whole hour. We were all as happy as a monkey with a peanut machine, then I went to bed and got 800 messages and phone alerts saying I was a sneaky little liar. I didn’t know what to do, so my lawyers said, ‘Run, Jeffy! Run!'”

Sessions also weighed in on his good friend Kellyanne Conway, who allegedly isn’t allowed to speak on behalf of the Trump campaign following her latest highly publicized faux pas. 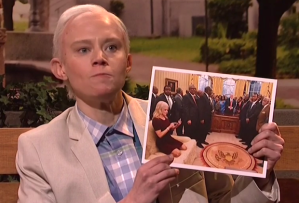 “Being in the government is so fun… you meet so many nice people like this, my best friend Kellyanne,” Sessions remarked, before taking out a photo of Conway’s infamous Oval Office couch goof. “She ain’t got no legs. She’s the best talker you ever heard… but they don’t let her talk anymore.”

After a quick meeting with Beck Bennett’s Vladimir Putin, McKinnon’s Sessions then exchanged pleasantries with host Octavia Spencer, who reprised her role as The Help‘s Minny Jackson and baked a special pie especially for the Attorney General.

What did you think of SNL‘s Jeff Sessions spoof?