What is Love if not a battlefield — or just one man’s noble attempt to get a girl he likes away from his apartment so they can avoid rushing into sex?

Netflix’s underrated, delightfully rough-around-the-edges rom-com returns on Friday, March 10, beginning with a premiere that takes the concept of a bottle episode and essentially turns it on its head. The half-hour finds Mickey trapped at Gus’ apartment complex amid a police lockdown, trying to resist the urge to hook up in the wake of admitting that she’s a sex and love addict. Unfortunately, Gus’ efforts to help her escape result in an intense run-in with the cops (as first previewed in the Season 2 trailer), involving both ground forces and overhead backup. 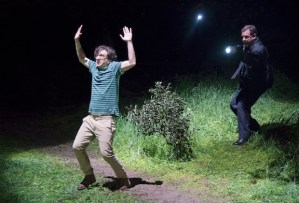 “We did think… ‘Oh, if these people realize the one thing they can’t do tonight is hook up, wouldn’t it be funny if they couldn’t leave?'” series star and co-creator Paul Rust tells TVLine. “The fun of the episode is that you think… [it’s] going here, and then by the end there’s helicopters flying over our heads.”

Gillian Jacobs, who performed in her fair share of bottle episodes during her six seasons on Community, admits it was a new experience to be on a series whose motivation for doing a no-frills installment like this wasn’t poverty.

“Every time we did a bottle episode on Community, it was truly because we had run out of money on the one before,” Jacobs says with a laugh, indicating that the decision always boiled down to “‘let’s make up some money by having you guys in the study room.'”

It’s a big season for Jacobs’ Mickey, who is finally coming to terms with all of her myriad demons. Not only does her sex and love addiction factor into the (ill-advised?) choice to commit to Gus, but she also grapples with her sobriety after stumbling across an old bag of mushrooms.

“I think that Mickey has had this insight about herself and had a very positive experience at a 12-step meeting [at the end of Season 1], but then life gets in the way,” Jacobs says. “She’s feeling very sure and very certain when she’s by herself, and then I think when she is with Gus, it makes her feel more conflicted.”

Of course, Mickey can’t blame all of her problems on Gus. Though she is willing to accept that she’s an addict, she is unwilling to abide by the unwritten rules of sober living.

“I think she’s a person who still thinks she can kind of do everything on her own terms,” she adds. “I think we start this season with her thinking that the rules that other people are following do not apply to her and that causes some problems, but I also feel like there’s undeniable chemistry between Gus and Mickey and she’s following that.” (With reporting by Kim Roots.)