We’ve got questions, and you’ve (maybe) got answers! With another week of TV gone by, we’re lobbing queries left and right about shows including The Walking Dead, The Bachelor, Suits and Riverdale! 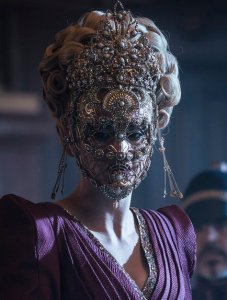 did you suspect something was “off “with Lady Ev when the gunshot to her head failed to produce even a droplet of blood? And do now you have all kinds of questions about her and Jack’s recent sexual encounter?

2 | We’re thrilled to have Katherine back on The Vampire Diaries, but was she really the next in line to run Hell? Shouldn’t there have been a few more powerful villains ahead of her — perhaps someone whose last name rhymes with Shmikaelson?

3 | On The Walking Dead, if Negan’s guard walkers — and theoretically, by extension, all walkers — are deteriorating and rotting away to goop, doesn’t that suggest that, by and by, walkers will altogether cease to be a threat? Or is there some Eugene-y science at play that we aren’t getting?

4 | Did any Voice viewers keep count of the number of references to Blake Shelton and Gwen Stefani’s relationship during Monday’s premiere?

5 | How must APB‘s Captain Conrad feel about his officers calling Gideon “boss”? 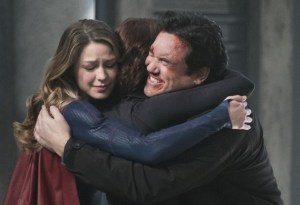 of welcoming Supergirl‘s Jeremiah back to the fold, the DEO never once ran any kind of physical that might have picked up on the fact that he is part robot?

7 | Will the ex-boyfriend of The Bachelor‘s Raven ever dare to show his face in public again, after she announced to the world that he was never able to satisfy her? And despite we the viewer knowing exactly what goes on in the Fantasy Suite, has a contestant ever spoken so openly about having sex in there as Raven did?

8 | Could The Flash have used some panic in the streets, given that a gorilla army was invading the city? Were you surprised by the large and dense forest surrounding all sides of Central City? And is Jesse being a bit selfish, robbing Earth-Two of a speedster hero just so she can go for malteds with Wally?

9 | Imposters fans, was Uma Thurman (as Lenny) surprisingly scary? And were you shocked that Sally killed the mark, and not the other way around? 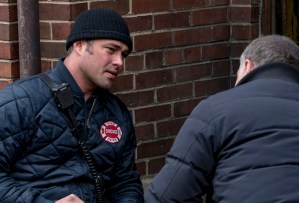 when a #OneChicago crossover airs all on one night or on consecutive nights?

11 | TVLine reader Ceylan asks about Arrow: “Did anyone else notice that CC Jitters pulled double time as the restaurant Paul and Curtis met at?” And speaking of Paul, would it be too pat(/silly) if he turns out to be Vigilante?

12 | When Suits‘ Donna declared she wants more, do you think she meant something more from Harvey, too?

13 | Who’s the worst parent on Riverdale? (There’s so many to choose from!) And were you expecting something more twisty with the Polly reveal?

14 | Was it odd to see ABC heavily promoting Jimmy Kimmel’s lighthearted, jovial interview with George W. Bush during Thursday’s penultimate When We Rise, an episode which featured a rather stinging rebuke of Dubya’s anti-gay record as president? And couldn’t 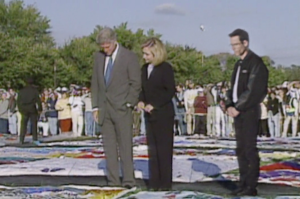 the miniseries employ better CGI than the Forrest Gump-level effects they used to splice Guy Pearce into ’90s footage of the Clintons?

15 | Was Training Day more offensive with its portrayal of the gay inmate or the epithet-spewing, stereotype-citing “1/16th Indian” casino owner?

16 | Did Nashville forget that Maddie is an emancipated minor? Wouldn’t that have affected her guardianship after Rayna’s death? In other news, should Juliette have been carrying Cadence around on one hip just days after ditching her crutches?

17 | On Friday’s Today show, couldn’t producers have checked the spelling of the name of Savannah Guthrie’s new baby Charlie — it was on his sweatshirt, after all — to make sure it was correct in the on-screen graphic?

18 | Which celeb duo should the Motion Picture Academy and ABC recruit to present next year’s Oscar for Best Picture? And will there be a more highly sought after gig than that?