In the odd Thursday episode of The Voice, Adam Levine decided to give himself a little time-out rather than risk getting his heart broken once again by a contestant rejecting his offer to join his team. And it was around that time that I started wondering if I didn’t need a time-out, too, since it seemed like, every singer or two, I had a new favorite. I mean, how fickle can one person be? Or does that happen to everybody who watches? (Reassurances welcome.)

As for the vocalist who Adam couldn’t bear to miss out on, she’s first up in the (otherwise randomly ordered) below critiques of the singers advancing from the Blind Auditions to the Battle Rounds. Back in the recaps — thank reader Logan Lawrence for the suggestion — are letter grades assigned to the performances a la my inimitable predecessor, Michael Slezak. You are, of course, not only welcome but encouraged to debate and regrade the performances in the comments as you are ranking them from least- to most-impressive.

Casi Joy (Team Blake), “Blue” — Grade: A | Adam called the yodeling that the Kansas City 26-year-old incorporated into her LeAnn Rimes cover “the craziest thing I’ve ever heard.” But even more noteworthy, I thought, was the level of control that she had over her voice. Though I may get momentarily carried away — OK, often, a lot — by the bombast of some of the youngsters in this competition, even I can acknowledge that it’s probably a more seasoned singer who has a handle on her pipes and what they can do that will go the furthest, right?

Ashley Levin (Team Blake), “Let Him Fly” — Grade: B- | “Understated” is the word I’d use to describe the Patty Griffin cover by this Miami 23-year-old, the physical embodiment of a ray of sunshine, according to Adam. And she has charm, for sure. But she didn’t, you know, pop for me. (Then again, you’re probably learning right along with me that, kid at heart that I am, the louder the vocalist, the better I like ’em.)

Brandon Royal (Team Gwen), “Master Blaster (Jammin’)” — Grade: C | This 31-year-old firefighter, who grew up in the U.S. Virgin Islands before settling in Florida, nailed the rhythms of the Stevie Wonder hit. However, I couldn’t help but think that, overall vocally, he was really good… if I was listening to him on karaoke night somewhere. (Go ahead, eviscerate me.) Even though Blake Shelton declared, “I wanna help you hold your hose,” Brandon still went with the country superstar’s girlfriend, who called his sound “so pure.” 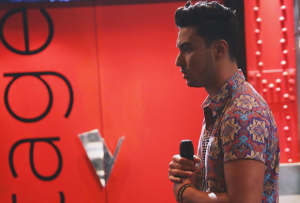 Julien Martinez (Team Adam), “Pride and Joy” — Grade: B+ | Determined to “let his freak flag fly,” this 21-year-old Californian hit the stage with a “devil’s roar” that made Adam expect “a giant biker.” And the scream was impressive — Blake said that it was the best he’d heard since David Lee Roth. But, as with Casi, what might end up serving Julien even better than his raw talent is the apparent control that he has over it. 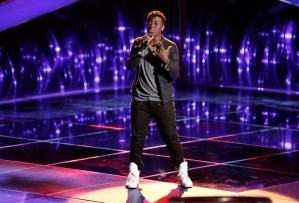 Quizz Swanigan (Team Alicia), “Who’s Loving You” — Grade: A | The youngest contestant in the competition, this 13-year-old covered the Jackson 5 with a soulful abandon that sounded like it came from a version of himself that wouldn’t — hell, couldn’t! — exist for years yet. Coach Keys praised the “innocent, fluid thing” that he had going on with his voice. The rest of us probably noticed that he seemed like such a sweetie, you’d have to be pretty heartless to vote him out.

So, who stood out for you in Thursday’s Blind Auditions? Rank ’em from worst to best below, and if you so desire, affix a letter grade to boot.