Stefan and Caroline’s wedding arrives early on Friday’s Vampire Diaries (The CW, 8/7c), triggering a series of twists that no one in the cast saw coming. (Then again, not everyone in the cast saw the wedding coming in the first place.)

“I heard about this June wedding for the first time at Comic-Con,” Paul Wesley admitted to reporters at a recent screening of Friday’s episode. “I had no idea what everyone was talking about, and I still kind of don’t really know what it’s about. But apparently there’s some June wedding — like, the fans talk about a June wedding. So when they first told me that we were going to have a June wedding, I was like, ‘Oh, cool. We’re paying homage to the fans.'” 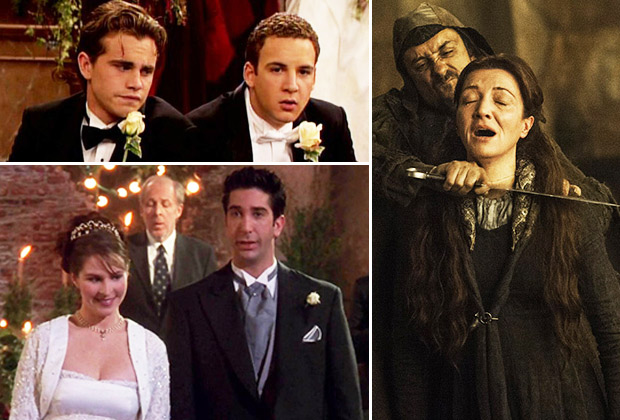 “Never in a million years” did Wesley think Stefan would someday call Caroline his bride, especially after so much of the early part of the series was built around Stefan’s relationship with Elena. He said, “I never knew [Stefan and Caroline] would be equally as powerful … as a couple.”

Speaking of Elena, Wesley conceded that “it would be very strange to not have Nina [Dobrev] come back for the finale. The whole story is about two brothers … fighting over a girl. I mean, there’s a zillion other storylines, but I felt like it would have been a real shame for the show to not … wrap that up to a degree.”

Of course, Elena isn’t the only role Dobrev reprises in the coming weeks. Let’s not forget that one of the wedding’s primary purposes is to lure “the myth, the legend, the baddest bitch of all” out of hiding.

“Katherine’s a disaster,” Ian Somerhalder stated, unchallenged. “I mean, there’s nothing good about [her coming back] for anyone.” (That said, he and Wesley agreed that the wicked Petrova doppelganger is a “fun” presence to have around.

Of the series finale — airing Friday, March 10 at 9/8c, following a retrospective special — Somerhalder said he was “blown away” by what writers Julie Plec and Kevin Williamson managed to accomplish with a 44-minute story. Added Wesley, he thinks fans will find it “satisfying.”

What are your hopes for Friday’s wedding? Next week’s finale? Whatever’s on your mind, drop it in a comment below.