Did Wednesday’s Supernatural do anything to help you understand Mary’s actions?

Mama Winchester certainly tried her best to get Dean and Sam to see that she’s only working with the British Men of Letters because their resources help foster “a better way” of hunting. She just wants to rid the world of monsters for her boys! But Dean’s not having any of it.

“You didn’t need just space. You needed space from us,” he argues. “How about for once, you try just being our mom?”

By teaming up with the Brits, Mary chose the Men of Letters over her family, Dean posits. To add insult to injury, he calls her Mary, not mom, and declares, “There’s the door.”

Dean then ignores Mary’s calls, while Sam tries to play peacemaker by arguing that Mary is family and they owe it to her to hear her out. That doesn’t sit well with Dean, who wants Sam to pick a side. When Mary reaches out, Sam meets up with her at the Brits’ shiny, temporary headquarters, where he gets a sneak peek at how the MOL intend to take out all the vampires in America.

Mr. Ketch, meanwhile, goes to Dean with a bottle of scotch. He doesn’t care about recruiting Dean, but the old men back home want the Winchester boys because where Dean and Sam go, the rest of the American hunters follow. Ketch drops a tidbit about a nest of vampires, and Dean bites. But when interrogating one of the bloodsuckers, they discover that the Alpha is back and the others have gone to hunt the hunters at MOL HQ. The Alpha was well aware of the Brits’ handiwork overseas, but he didn’t “get involved because, well, it’s England. But America is my home. I think it’s time you get off. My. Lawn!” he exclaims at Mick. 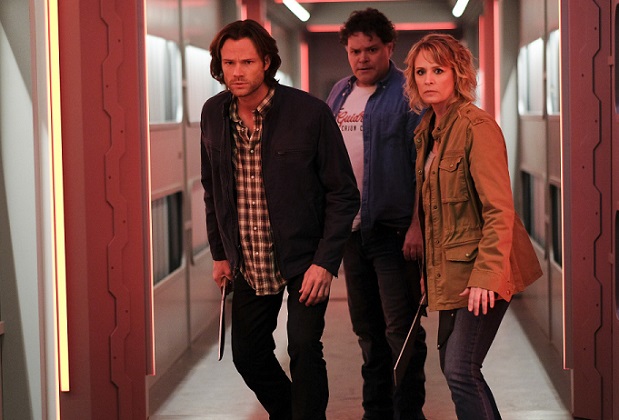 With vamps descending on the outmanned heroes – the MOL’s one hunter outside of the Winchesters is not exactly a pro – Mick is forced to bring out the Colt. Several Brits are lost during the fight, but Sam is able to kill the Alpha with the gun. (That silly hunter? He had an arrangement with the Alpha.) The younger Winchester is so impressed that they managed to take out the Alpha, he decides to enlist. (Hey, Sam, they couldn’t have done it without your bullet spell!)

“You’re changing the world, and I want to be a part of it,” Sam tells Mick. And what about Dean? He implores Mick to “give me some time.” Oh no, please don’t let this turn into a family war.

Speaking of Dean, he does eventually make peace with the fact that Mary is an adult who makes her own choices — whether he likes it or not.

Supernatural fans, what did you think of “The Raid”? Hit the comments with your thoughts!