Both Bellamy and Octavia got a chance practice their negotiation skills on Wednesday’s The 100 — only one Blake sibling was considerably more successful than the other.

Let’s start with Octavia, whose failure to prevent Ilian from exacting his revenge on Skaikru resulted in all manner of fiery destruction. The hour ended with our favorites watching helplessly as a devastating fire ravaged Arkadia, destroying the drop ship in the process.

The irony, of course, is that Clarke & Co. spent the entire episode at a stand-off with the Ice Nation over control of the now-destroyed ship, which Clarke agreed to share with Roan in order to prevent Kane and Bellamy from being killed.

Speaking of Bellamy, he got another chance to play hero this week by talking Riley down from taking a shot at Roan. “War made me a murderer,” Bellamy told him. “Don’t let it happen to you.” (Growth!) And as a karmic reward, the universe reunited him with his sister — granted, it wasn’t under the best of circumstances, but with those two, I’ll take what I can get.

Meanwhile, Raven was working through a crisis of her own in Becca’s lab. Following a trippy seizure — during which Raven thought she was flying through the air — Abby discovered evidence of a stroke in her brain, as well as traces of ALIE’s code.

Abby’s worried that Raven is going to push herself too far, which is a valid concern. But if I’m being honest, I think Abby’s the one we really need to be worrying about. The final scene of the episode found her speaking to (a hallucination of?) Clarke, who warned her that they’re running out of time. And it wasn’t the regular-looking Clarke we all know and love — it was this Clarke from the Season 4 trailer: 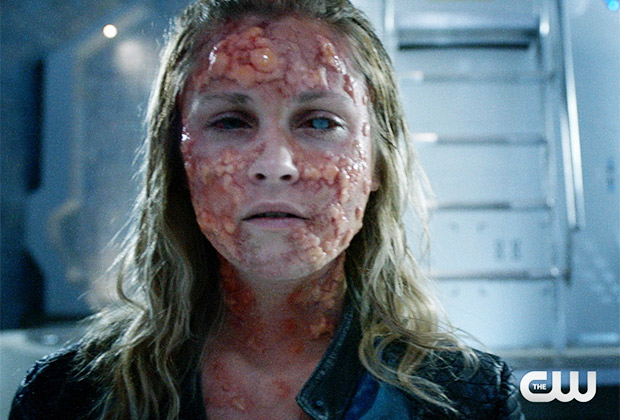