Want another season of The Big Bang Theory? It may depend on making two geeky women very happy. 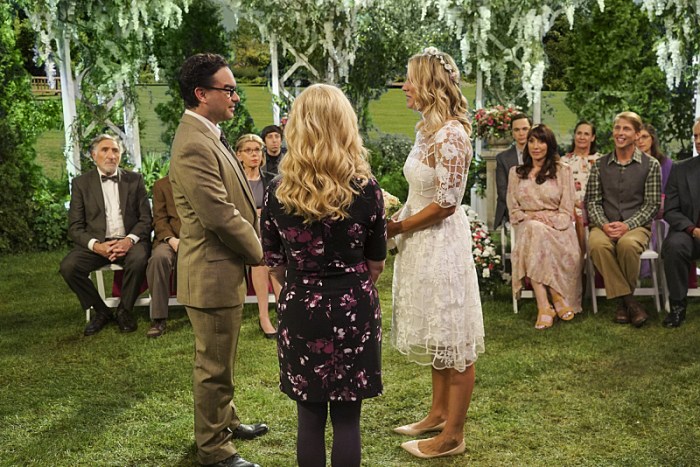 As previously reported, the hit CBS sitcom, currently in Season 10, is nearing a two-season renewal. But according to our sister site Variety, the final snag holding up the deal is securing a substantial raise for cast members Mayim Bialik (Amy) and Melissa Rauch (Bernadette).

The show’s five other main cast members — Jim Parsons (Sheldon), Kaley Cuoco (Penny), Johnny Galecki (Leonard), Simon Helberg (Howard) and Kunal Nayyar (Raj) — all currently make $1 million per episode, while Bialik and Rauch, who both joined in Season 3, make just (“just”) $200,000 per episode. The Variety report says the original five actors volunteered to cut their per-episode fee by $100,000 each to free up money to give Bialik and Rauch a raise. (Bazinga to that!)

That would bump up Bialik and Rauch’s per-episode salaries to $450,000 each. But their reps are said to be pushing for pay parity with their costars, meaning they would make as much per episode as Parsons and company. Negotiations with Bialik and Rauch’s reps are reportedly underway this week.

It’s hard to imagine a Big Bang without Amy and Bernadette: Bialik has earned four Emmy nominations as Sheldon’s awkward girlfriend Amy Farrah Fowler, and Rauch’s squeaky-voiced Bernadette just gave birth to her and Howard’s first child earlier this season. And it’s hard to imagine a CBS lineup without Big Bang in it: Even in Season 10, the comedy remains TV’s top-rated show in total viewers, averaging 19.5 million viewers each week.

Per Variety, both CBS and the show’s studio, Warner Bros. TV, are “optimistic” a renewal deal will get done… which means Amy and Bernadette might be able to splurge on fancy new eyeglasses soon enough.

Do Bialik and Rauch deserve Big Bang-sized raises? Drop your thoughts in a comment below.