President Donald Trump on Tuesday made his first Address to Congress, announcing a “new chapter of American greatness” — while upholding the grand tradition of televised awkwardness.

To the president’s credit, the man speaking before Congress on Tuesday was a softer, more conciliatory Trump than we’re used to seeing. As NBC’s Chuck Todd noted immediately following the address, “We have not seen him deliver a speech like this before.”

But that doesn’t mean there weren’t plenty of moments during Trump’s speech — which focused primarily on immigration, jobs, healthcare and infrastructure — that left us feeling… uneasy. Below, we’ve highlighted seven such moments:

* When Trump expected a standing ovation for displaying American-made Harley-Davidson motorcycles on the White House lawn — and all but sought out a high-five from those in the front rows for having been invited to ride them.

* When Trump needlessly gestured towards Nancy Pelosi during his rant against Obamacare. Meanwhile, Pelosi served up a veritable Emoji keyboard of appropriate reactions:

* Perhaps worse than when President Obama got heckled by Joe Wilson at his own first Address to Congress, Trump was clearly booed by some upon announcing his plan for V.O.I.C.E. — Victims of Immigration Crime Engagement — a new government agency for “victims of crime” committed by immigrants.

* When Trump actually thought he could get away with saying “As the Bible teaches us…” like we’ve all forgotten that time he tried to quote “Two Corinthians.”

* When half of those in attendance remained seated for the duration of Trump’s speech: 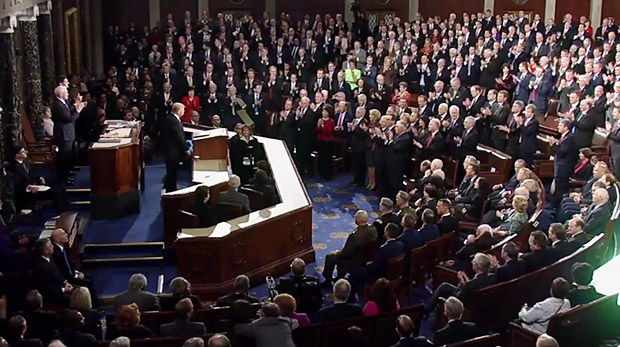 What did you think of Trump’s first Congressional address? Drop a comment with your stand-out moments — negative or positive — below.