Time travel is everywhere you look on TV these days — Timeless, Frequency, Legends of Tomorrow, Time After Time — and yet it’s usually of the life-or-death, save-the-world variety. But what if you just want to use your time machine to meet girls and party, man?

That’s the refreshingly lowbrow premise behind Fox’s Making History (premiering Sunday, March 5 at 8:30/7:30c), starring Adam Pally as a modern-day loser who uses a giant duffel bag to travel through time and rearrange past events for his own selfish benefit. Gleefully poking fun at revered historical figures and armed with a supporting cast of alt-comedy all-stars, History won’t save the world or anything, but it’s a pleasantly goofy romp through the history books.

Pally, so great as slacker Max on the terminally underrated Happy Endings, stars here as Dan, a lowly maintenance man who stumbles upon the duffel bag among his dead father’s belongings. (Don’t get hung up on the time-travel technicalities; the show sure doesn’t.) Dan doesn’t have much going for him, but when he travels back to the time of the American Revolution, he’s basically a god, using his centuries of knowledge — and large hunks of invaluable ham — to make friends. He even woos a pretty colonial girl named Deborah (Leighton Meester) by singing her a beautiful song he wrote for her… entitled “My Heart Will Go On.” 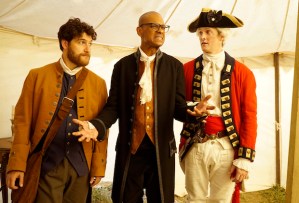 But when Dan worries that he may have actually changed the result of the Revolutionary War with his time-travel antics — Starbucks sells tea now?! — he enlists history professor Chris (Yassir Lester) to go back with him and set things right. A nerdy history buff, Chris is thrilled to meet his heroes like John Hancock and Sam Adams — but he quickly finds that maybe the Founding Fathers weren’t as brilliant and high-minded as we’ve been told. And Deborah likes the sound of the 21st century so much, she wants to travel back with Dan and Chris to experience it for herself.

Creator Julius Sharpe wrote for Family Guy, and that makes a lot of sense: Making History has a surreal, silly feel to it that makes the show a perfect fit on Sunday nights with Fox’s animated lineup. It has the breathless, gag-a-minute pace of a living cartoon, and it’s lots of fun to watch an uncomplicated dude like Dan using the power of time travel for less-than-noble purposes. Even the time machine itself is funny: The duffel bag is cramped and inconvenient, and explodes in ridiculous fashion when it zaps through time. 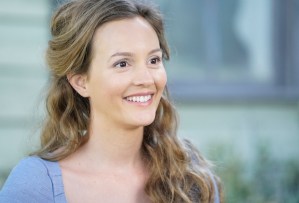 Pally thrives at playing this type of charmingly oafish sleazeball, and Lester is a great straight-man foil for him as the painfully uptight Chris. Plus, the supporting cast is dotted with comedy pros like Broad City‘s John Gemberling and Inside Amy Schumer‘s Neil Casey, who play Hancock and Adams. But the real revelation here is Meester, who’s delightfully daffy as Deborah, a wide-eyed innocent who can slaughter a bear and then be dazzled by a shiny York peppermint-patty wrapper. I’ve never seen the Gossip Girl alum do comedy before, but she absolutely shines here, even next to seasoned sitcom veterans.

Sure, at times, Making History‘s sense of humor might get a little too dumb and anarchic, and its pop-culture references feel a bit dated. (Couldn’t they mock anything more current than Jerry Maguire and Titanic?) But when one joke flops, another one quickly jumps in to redeem it. And Dan’s genuine affection for Deborah — and desperation not to mess up the one decent relationship he’s ever had — is oddly endearing, and gives the show a solid foundation while all the jokes whiz by.

Best of all, the time-travel conceit opens up an unlimited range of comedic possibilities: A pair of later episodes take the trio to gangland Chicago in 1919, where they run afoul of Al Capone. The high-concept premise and serialized storytelling actually remind me of NBC’s The Good Place, which steadily improved over the course of its freshman season to become one of TV’s boldest comedies. I don’t expect Making History to reach those heights — it’s not as structurally ambitious — but as long as the laughs keep coming, it’s got a bright future just the same.