This Tuesday on The Flash (The CW, 8/7c), it’s “kill or be killed” for Grodd’s invading gorilla army — and maybe for Barry as well.

In Part 1 of the Gorilla City storyline, Barry and friends were imprisoned on Earth-Two and duped into doing sentient Grodd’s bidding, ousting Solovar as leader of the apes. Now, with Gypsy’s help, Grodd is about to launch an attack on his onetime home, Earth-One’s Central City — and to that end, he will hit a bit too close to home for the scarlet speedster.

Here, co-showrunner Aaron Helbing teases what’s ahead, as well as drops an interesting clue about Barry’s trip to the near-future.

TVLINE | Which came first, the assorted news headlines you wanted to Barry to see when he landed in the near-future, or the things you actually wanted to do in Season 3?
Oh, we wanted to do this type of two-part episode since Season 1, when we first introduced Grodd in Episode 5. We ask everyone on the show, “What do you absolutely have to see? If you could see anything, what would it be?” And “Barry against Solovar in an arena,” that alone is a headline we were definitely going to strive for. That’s something we’ve been building towards.

TVLINE | I appreciated Cisco’s throwaway line establishing that Earth-Two’s Africa is cold. Was that because you knew we’d be seeing the actors’ breath outside?
[Laughs] You know, we’re just dealing with the realities of Vancouver. And it being Earth-Two, anything’s possible. The actors are serious troupers, though, it was very, very cold. But we just went for it. This is what Mother Nature has given us, so we’ll march forward.

TVLINE | You took a 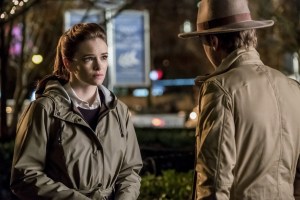 moment in that episode to let Caitlin and Julian have that talk. Why was it important for that conversation to happen?
Because Julian has feelings for Caitlin and she’s important to him. He’s kind of an old-school guy going against a woman is clearly formidable and able to take care of herself, so he’s just trying to be a gentleman. He wanted to make sure that, since she’s a woman he cares about, he would be there for her in this alternate world. Plus, he got the opportunity to go to another Earth!

TVLINE | Ballpark figure, how many gorillas will we see storm Central City?
I think you’ll see about a legion. I’m just going back to my Spartacus days, where we would talk in those terms. I would say it’s about “a Roman legion” in the beginning.

TVLINE | The gorillas seem a bit fixated on setting fire to things. “Your city will burrrnnnn” and all that. Is that just because that’s what apes are gonna do? They’re not going to hack our computers?
I think Grodd could maybe hack a computer, since he’s a supergorilla, but the rest of them still fall under the laws of nature and “kill or be killed.” And since Grodd right now is telepathic, they’ll do whatever he tells them to. But I wouldn’t underestimate Grodd. Because of his telepathic abilities, he is able to overtake General McNally, who’s in charge of the military. Grodd has a lot of tricks up his sleeve.

TVLINE | I suppose they could also freely poop in the streets. That’s a threat.
[Laughs] I don’t know if that is visually exciting to us as a viewer, but that could be a possibility!

TVLINE | Is it safe to say Gypsy is not acting on her own free will, getting the gorillas to our Earth?
Yes, she is basically under Grodd’s control, and that will serve as a clue to Barry and the team that Grodd is no longer on Earth-Two, that he’s made his way onto Earth-One. 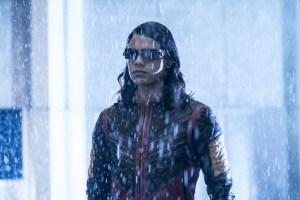 challenges will Team Flash face going up against a legion of apes?
Since Grodd has the ability to overtake anyone, he’s going to overtake someone very close to Barry, and almost kill him. That’s really going to affect Barry and make him question: “Do I allow Grodd to live, or should I just kill him and put an end to it? Maybe that will change the future?” You’ll see Barry and Kid Flash and Jesse Quick, along with Vibe and Gypsy, take on the army of gorillas and do what they can. The gorillas aren’t as fast as speedsters, but when you’re going against 10 gorillas at a time, one of them is bound to get a punch in.

TVLINE | I don’t know if you saw Hulu’s 11.22.63 or read the novel, but one of the precepts there is “Time wants to happen,” and if you try to screw with the timeline, “Time pushes back.” Does that idea hold true for The Flash?
I think time does want to happen, but in our universe it’s malleable. So because of that, anything is possible.

TVLINE | What might Iris herself do, in the name of changing her future?
Honestly, I don’t want to give anything away on that front at this moment.

TVLINE | Lastly, a reader wanted to ask: Was it pure coincidence that Barry landed where and when he did in the future, to witness Savitar killing Iris?
I would say that Savitar has a plan. Since Savitar was kind of tethered to the Philosopher’s Stone, he sent Barry to a time that he needed him to go to.