And the star, co-creator and executive producer of Julie’s Greenroom, which premieres Friday, March 17 on Netflix, knows of what she speaks. At a recent press event hosted by the streaming video site, Andrews told journalists she was very involved in the creation of the puppet cast members on her new children’s show, right down to choosing their garments and skin colors.

“I’ve long wanted to do a program to convey the joy of the arts to children and to families, and to just specialize in that,” she said.

Julie’s Greenroom follows the “Greenies” (aka the puppets) as they explore musical and theatrical arts under the direction of Ms. Julie (played by Andrews) and her assistant Gus (Giullian Yao Gioiello, The Carrie Diaries). Almost every episode features an original song; guest stars showcase a new art form each week.

Julie’s Greenroom begins streaming on Friday, March 17. Before then, here are a few things to know: 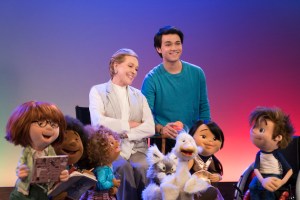 * Several puppeteers from the original Broadway cast of Avenue Q work on the show, which makes pretending that the foam creations are actual kids a lot easier,” Andrews said: “I don’t see [the] puppeteers. You focus on the puppets.”

* Each of the season’s 13 episodes builds toward the Greenies’ final performance, which demonstrates what they’ve learned under Ms. Julie’s direction. The catch: A wealthy benefactor will be attending the event, and the theater is in need of funding. “We know firsthand how incredibly important [the arts are], and it’s always the first thing to be cut,” Hamilton explained.

* That benefactor,  Mrs. Edna Brightful, is played by Carol Burnett — the only celebrity to make an appearance as a character and not as herself. Andrews said she “cracked up” when she first saw her old friend Burnett in character. (Picture a wig and an bright orange suit.)

* The puppets represent a mixture of body types and skin colors, the creative team said, and the episodes emphasize that various art forms are accessible for everyone, no matter their gender or physical limitations. For example: One episode will highlight ballet and point out that it’s not just for girls!

* For those parents hoping to enjoy Julie’s Greenroom with their own children, Andrews, Hamilton and Henson said not to worry. “Although it is a preschool show… it is a show we hope families will watch together,”  Hamilton added.