The Walking Dead has walked right into a real-life controversy… and the man who plays Negan has come out swinging.

British retail chain Primark pulled a Negan-themed Walking Dead T-shirt from its shelves this week, after a customer objected to the graphic on it that reads “Eeny Meeny Miny Moe,” calling it “racist” and “offensive.” And star Jeffrey Dean Morgan, who plays Negan on AMC’s zombie hit, didn’t mince words while reacting to the decision, tweeting on Wednesday, “Holy crap people are stupid.”

Negan recited the familiar children’s rhyme in last year’s Season 6 finale while deciding which member of Rick’s gang to bash to death with his bat Lucille. But, as the objecting customer noted, an earlier wording of the rhyme continues, “Catch a n—r by the toe.” On the show, Negan used the more common current version, “Catch a tiger by the toe,” but Primark customer Ian Lucraft still took offense. 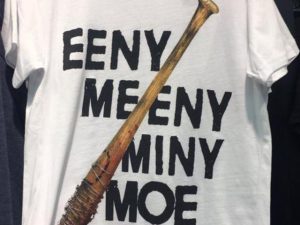 “The graphic has a large American baseball bat, wrapped round with barbed wire, and covered with blood,” Lucraft told the UK newspaper The Star. “This image relates directly to the practice of assaulting black people in America. It is directly threatening of a racist assault, and if I were black and were faced by a wearer, I would know just where I stood.”

Primark pulled the T-shirt from its stores and issued an apology: “The T-shirt in question is licensed merchandise for the U.S. television series The Walking Dead, and the quote and image are taken directly from the show. Any offense caused by its design was wholly unintentional, and Primark sincerely apologizes for this.”

AMC hasn’t commented yet on the uproar — but for now, the network’s official site still offers a similar (though not identical) “Eeny Meeny Miny Moe” Negan T-shirt for sale.

Was Primark right to pull the T-shirt? Or did they overreact? Drop your thoughts in a comment below.