Just in case the original Blacklist wasn’t serving up enough lies and deceit for your liking, NBC has introduced The Blacklist: Redemption, a Tom Keen-centric spinoff that promises as much family betrayal as you can handle.

The question is, did Thursday’s premiere do enough to hook you?

In case you’ve forgotten since last May’s backdoor pilot, Tom Keen was thrust into the protagonist role after meeting Scottie Hargrave (X-Men‘s Famke Janssen), the co-owner of a private military intelligence agency called Halcyon Aegis. When Scottie needed help tracking down a Big Bad last spring, she recruited Tom for the job — but he declined her offer to permanently stay with Halcyon Aegis after the gig was over. 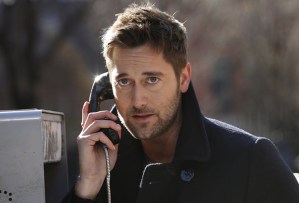 But here’s the real kicker: Scottie is also Tom’s long-lost mother. And she doesn’t know he’s her son. Because no one does dysfunctional families quite like The Blacklist. (Tom, aka Christopher Hargrave, disappeared from his parents’ home when he was a young boy, and he was never found. Scottie has presumed her son dead ever since.)

In Redemption‘s debut, Scottie once again calls upon Tom for help with a new case: the rescue of Anna Copeland, a CIA operative who, along with her young son, was abducted by a former teammate named Leland Brey. (The good news: They save her! The bad news: They have to cut a bomb out of her stomach to do so. Thursdays, am I right?)

But at its core, Redemption is about the secrets within Tom’s fractured family, and the premiere does a solid job of building his conspiracy theory-filled world. When he arrives in New York City for what he thinks will be a meeting about his late father’s will, he comes to find that his dad isn’t dead at all. Rather, Howard Hargrave is alive and well, and he believes the recent plane crash that “killed” him only occurred because Scottie sabotaged the aircraft.

Later, after Tom’s rescue mission with Scottie is over, Howard brings his son to an apartment building where he’s been accumulating research about Scottie for decades. He believes Scottie is up to something shady; in fact, he thinks she might somehow be responsible for Tom’s disappearance as a child, in addition to the plane crash that almost killed Howard himself. Lacking a firm theory about what Scottie plans to do next, Howard encourages Tom to go undercover within Halcyon Aegis. He’ll continue to work missions with the agency, all the while trying to unearth what his mother is up to and hide from her that he’s really Christopher. Easy peasy.

Armed with this new information, Tom approaches Scottie at the end of the hour and tells her he’d like to join Halcyon Aegis full-time. Her response, fittingly: “Welcome to the family.”

OK, your turn. What did you think of Redemption‘s first outing — and how did it stack up to the original Blacklist? Grade the series premiere in our poll below, then hit the comments with your thoughts.