Prepare yourself, because Gods will be among us this spring.

Starz’s adaptation of Neil Gaiman’s American Gods novel will premiere on Sunday, April 30 at 9/8c, the network announced on Thursday, while also releasing the key art poster below (click to zoom). 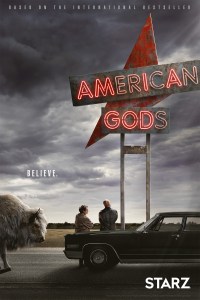 Based on the 2001 Neil Gaiman novel, American Gods follows a brewing war between the old and new gods; the old crew feels upstaged by the newbies, who reflect modern society’s obsession with money, drugs, celebrities, etc. The 100‘s Ricky Whittle stars as Shadow Moon, an ex-con who becomes the bodyguard of Mr. Wednesday (Deadwood‘s Ian McShane), an old god who seeks to build an army to take down the new regime.

Bryan Fuller (Hannibal) and Michael Green (Everwood) serve as executive producers on the series. Meanwhile, Gaiman recently adapted another of his novels, Good Omens: The Nice and Accurate Prophecies of Agnes Nutter, Witch, into a limited series for Amazon.

Are you planning to watch American Gods? Let us know in the comments!