The struggle for gay rights in America is absolutely a piece of history we should all learn. It’s too bad, then, that ABC’s bloated, self-serious miniseries When We Rise (debuting Monday, Feb. 27 at 9/8c) is such a slog to get through.

Spanning more than four decades of the gay-rights movement in four two-hour installments, When We Rise fictionalizes the stories of three real-life activists — free-spirited rebel Cleve, brainy feminist Roma and former Navy sailor Ken — as they fight for acceptance, from San Francisco’s Castro district in the ’70s to the Supreme Court’s decision legalizing gay marriage in 2015. That’s a lot of ground to cover, and Rise‘s storytelling falters as it tries to squeeze in every significant moment.

The older versions of Cleve (Guy Pearce), Roma (Mary-Louise Parker) and Ken (Michael Kenneth Williams) are played by recognizable stars, along with Rachel Griffiths as Roma’s girlfriend Diane. But those stars don’t show up until Part 3 of the miniseries, which means we have to get through four hours of prologue just to catch a glimpse of them. Parts 1 and 2 only feature the younger versions of the characters in the ’70s and early ’80s, and play like one of those cheesy retro miniseries like NBC’s The ’60s, with shallow characterizations and too-obvious music cues. 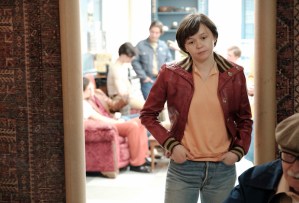 In the go-go ’70s, Cleve campaigns for doomed gay politician Harvey Milk, Roma battles for lesbian representation in the women’s-rights movement, and Ken comes to terms with being a black war veteran who’s also gay. But they’re all just walking, talking textbooks rather than fleshed-out human beings, rattling off exposition and making grand proclamations about their place in history. Their antagonists — disapproving parents, cops, gay-bashers — are all blockheaded villains with no hint of depth or nuance. And When We Rise feels too sanitized for network TV, with chaste sex scenes and violence that never gets truly ugly. 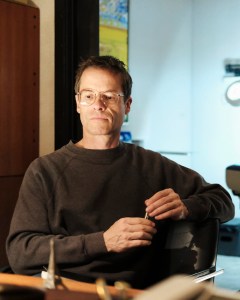 I hoped Parts 3 and 4, with the older actors taking over, would redeem When We Rise — but if anything, it gets worse. The older actors don’t resemble the younger ones at all, so their stories don’t feel as connected as they should. And the plot slows to a crawl as Cleve, Roma and Ken’s stories turn from political to personal in the ’80s and ’90s, covering the AIDS crisis and the legal fight against California’s Prop 8. After neglecting to establish who these characters are beyond their beliefs in the first two parts, the miniseries asks us to get invested in their internal struggles in the last two, and I started to long for the kinetic ’70s scenes again. (At least things were happening then.)

Writer Dustin Lance Black is in his element here — he won an Oscar for penning the 2008 Harvey Milk biopic Milk — and he’s clearly determined to educate today’s youth about the struggles their gay predecessors went through. (Pearce’s Cleve even chides a young interviewer in 2006: “Your generation is asleep.”) But Black’s determination leads to an overly ambitious narrative that tries to force-feed us huge volumes of gay history without giving us a reason to care. Rather than a living, breathing story, it feels like homework — and at eight hours, a lot of it.

While watching When We Rise, I kept thinking of all the other ways I’d rather see this story told: Maybe if they focused on one activist’s story or one time period, or maybe if it was on cable, or maybe if they scrapped the script and just made a documentary instead. Ultimately, though, When We Rise is what it is. It sets out to be the comprehensive historical record of gay rights in America, but its unwieldy structure and clumsy writing make it more of a footnote.

THE TVLINE BOTTOM LINE: Despite good intentions, When We Rise‘s dull, didactic take on the gay-rights movement doesn’t do it justice.