This week on NCIS, Agent Bishop (played by Emily Wickersham) pulled the trigger on her revenge plan against Chen — and along the way, let slip new intel on where things stood with her and boyfriend Qasim at the time of his death.

Working covertly with Reeves, Bishop confronted one of Chen’s couriers, who had heard “whispers” about an attack on the city’s electrical grid. When Gibbs caught wind of Bishop’s rogue investigation, by running into her and Reeves at the same abandoned radio tower that played a role in Chen’s latest scheme, they awkwardly worked together to learn that the plan was to infect diesel-run generates with a virus that would make them explode.

The evidence against Chen, though, was circumstantial, Congresswoman Flemming told NCIS. After she ordered that Chen only be surveyed versus arrested on charges he’d easily beat, Chen showed up at Gibbs’ home to inform him and Bishop that he has been working for the CIA, to help bring in a Syrian warlord. That doesn’t sit well at all with Bishop, so she swaps phones with Flemming and leads Chen to a rendezvous, where she presents him with a “Sophie’s choice”: wait for punishment at the hands of the Syrians she just ratted him out to, or trigger the virus that would explode the generator to which he was cuffed. Chen chose the latter, as Bishop, Gibbs et al watched the building explode from outside.

Afterward, Flemming suggested to Gibbs that it may be time for him to sit in the “big chair,” hinting that (her boyfriend) Vance may not be Director for much longer. Bishop then arrived, expecting a fierce lashing from Gibbs — though, she argued, she did what he himself would have done. Boss quietly-but-sternly warned, “Each time you go rogue, there’s a price to pay — and it isn’t cheap.” Before leaving, Bishop left with Gibbs a greeting card she was going to give Qasim on the day he died (and which she needed to stop looking at). In it, she answered “yes” to the marriage proposal he had made after 104 dates, as seen in new flashbacks.

TVLine invited Emily Wickersham to reflect on Bishop’s rule-breaking ways, where things stand with Gibbs and a possible change at the top of the NCIS totem pole.

TVLINE | When you get a script like this and see all the crazy stuff Bishop is up to, do you stop and flip to the end to see if she still has a job? Because when that radio tower blew up, I was like, “She is so fired.”
[Laughs] Exactly! “Am I being let go?? What’s happening??” I was so excited about this script because it’s fun when you get a meaty episode that is focused on your character — and in particular, in this one, getting to go after Chen. But my favorite part was being able to explore and show the audience Bishop’s relationship with Qasim. That was really cool.

TVLINE | I have to 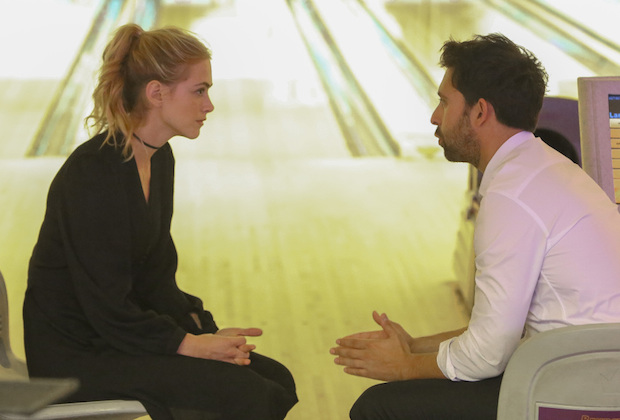 admit that when I was pitched this post mortem on Bishop’s revenge scheme, I thought to myself, “Um, how long was she dating this guy? That she is driven to avenge him?” But then these flashbacks showed us there was so much more going on.
I felt the same way. I always love my scenes with Rafi Silver, who plays Qasim, and I was so bummed when I read that he was getting killed. I was like, “I wish that we had explored that relationship more, that the fans could see what was really there.” So I was so happy when this episode came along, that we could see the evolution of their relationship and why she does what she does.

TVLINE | Gibbs warned Bishop that there’s “a price to pay” for going rogue. Will we see what she did weigh on her?
I’m so curious about that myself, because at the end of the episode there’s this mutual understanding between Bishop and Gibbs. The thing is that Gibbs would have done the same thing, even though it wasn’t “right” or abiding by the rules. So I’m sure it will weigh on her internally, emotionally and all that. But I’m kind of curious if work-wise there are consequences.

TVLINE | I was expecting something worse, a bit more heated, from Gibbs — though what he came back with was pretty damning, especially the way that Mark Harmon delivered it, where he takes that beat and then quietly, sternly tells you how it’s going to be.
Bishops and Gibbs have such an interesting relationship, because her really believes in her, and to her, he is the ultimate mentor, so obviously his opinion means a lot. She knows she did the wrong thing, that she let him down, but she also knows he would have dome the same thing. And because of that there’s this weird moment between them where it’s like, “OK, I see you.” And you don’t know where it’s going to go after that.

TVLINE | All told, what do you think of Bishop’s evolution these past few years? We met her as this numbers nerd sitting on the floor, now she’s skulking around corners, waving a gun….
It’s funny, my first episode popped up on TV recently, and it was so interesting because the character really is pretty different. Over these past few seasons, they have really given Bishop a lot to do, and we’ve seen her grow, a lot. She’s learned so much at work, she has gone through relationship things — death, cheating, all of this stuff. For me, it all adds to the character and makes her so much more fun to play. 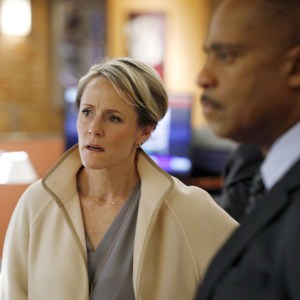 what can you say about the episode’s other big moment, the one that Ellie walked in — where Flemming was hinting to Gibbs that it may be time for him to sit in the “big chair”?
When we got to that moment at the table read, I was like, “Wait, what? Hold up….” We all kind of turned to each other. It was like a little tiny thing, but it was a big drop, so I am super-curious about that, because that would be a big deal, and a big shift.

TVLINE | But you haven’t seen that topic revisited in any scripts since…?
Nothing since — but I will keep my eyes peeled for you.

TVLINE | Hmm, that just makes writing my headline a bit tougher. I can’t really say “Emily Wickersham Talks About Gibbs’ Possible Job Change” if….
Well, there is always the possibility of change at NCIS. How’s that? [Laughs]