Does absence — 10 seasons worth of it, to be exact — make the heart grow fonder?

On Tuesday’s Bones (Fox, 9/8c), that question will be answered for Brennan when her ex-boyfriend Sully returns a decade after the two split up. Unfortunately, the character’s surprising reappearance — “I never thought that it would happen. I always hoped it would,” his portrayer Eddie McClintock says — is brought on by some sad news.

After hearing that Bones’ father died, “I think Sully is intuitive enough to know this is going to hurt her,” McClintock tells TVLine. So he makes a house call of sorts to the Jeffersonian, hoping to be there for Brennan in her time of need.

“At the end of the day, he’s grown up enough to know even though it didn’t work out between them, he still cares for her,” McClintock continues. “They have a bond. He likes her. They are ultimately friends, and that’s what friends do. They support one another and check up on one another, and they lift each other up when they’re in trauma. I think it makes sense for Sully to come back.” 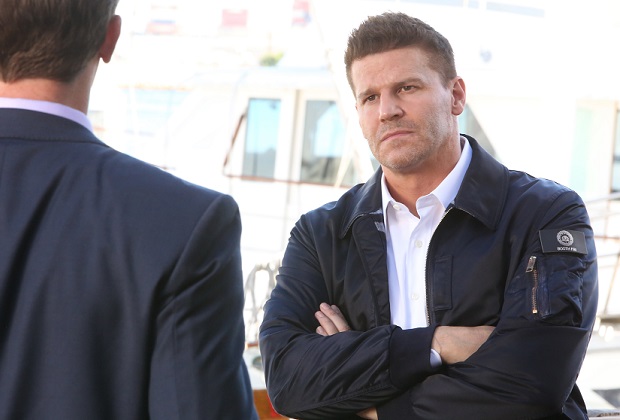 But will Booth think it’s a good idea for his wife’s ex to be hanging around, especially when she’s in a vulnerable state of mourning?

“[Booth is] a smart, good man, who is secure enough in knowing what he has with Bones,” McClintock describes. “He knows that, despite the fact that they may drift apart and drift back, he loves her and he believes she loves him. I don’t think he really sees it as a threat.”

Plus, the ex-FBI agent “isn’t coming back to ruin anything,” the actor insists. “He’s coming back because he cares about Bones. He’s a good guy,” who hasn’t changed very much from the “stand-up” person he was all those years ago.

Considering the deep bench of recurring characters on the long-running series, McClintock isn’t taking his guest spot during the show’s farewell run for granted. “It’s really an honor to be asked back, especially after 10 seasons,” he says, while crediting the Fox drama for paving the way for his starring role in Warehouse 13. “Without Sully, I don’t think Pete [from Warehouse] would have ever existed. I had been playing a lot of Joey Tribbiani -type character guys — the handsome, dumb guy” — before the G-man role came around.

Press PLAY below to watch a sneak peek of Sully’s comeback, then hit the comments with your thoughts.